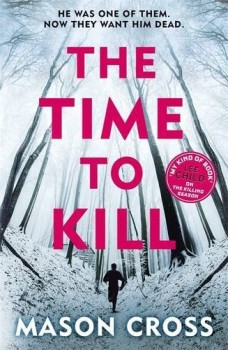 The Time To Kill

Carter Blake worked for a top secret US government agency – but now they want him dead.

Winterlong, a secret US government department with a shady past, needs to find and kill one of their former agents, Carter Blake. Five years ago they made a deal that he would keep quiet about their activities and in return they would leave him alone. With changes at the top of the organisation that deal has now changed. Blake’s skill is in hunting down people who don’t want to be found and now he is the one on the run.

Judging by the number of volumes on the bookshop shelves there is obviously an appetite for this kind of rogue agent thriller. The Time To Kill does not offer any developments to the established pursuit thriller genre, but is a prime example of smooth and effective storytelling. The pace and setting are different but there are at times echoes of Geoffrey Household’s seminal story of a manhunt, Rogue Male, in the amount of detail around the practicalities of preparing to be holed-up, on the run and off the radar.

It is inevitable that Blake will be compared to Lee Child’s Jack Reacher and there are similarities. Blake is described as ‘a thinker and a warrior’ by those seeking him. Despite the continuous cat and mouse story Cross builds in room to allow his characters to reflect on their actions and decisions so we get glimpses of humanity and even honour. This is not a basic chase novel but one with well-drawn characters and a credible plot. The adventure is structured effectively to include enough of a backstory revealing Blake’s previous missions and the motivation for his current assignment and predicament. In Blake we have a hero with questionable motives but one that is fundamentally likeable.

The Time To Kill is an exhilarating and absorbing thriller making good use of fast-paced action, scenes of tension and convincing characters.