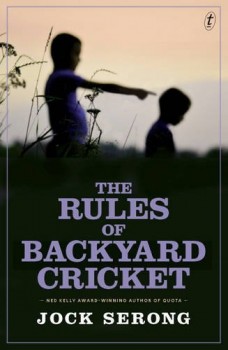 The Rules of Backyard Cricket

Darren Keefe and his brother are international cricket stars – but Darren can always find trouble and someone wants him dead.

Darren Keefe has ‘trouble’ tattooed in his forehead. He’s an outstanding cricketer, but his ability to start a row in an empty stadium ensures he’s the bad boy of Australian cricket. His older brother Wally, by comparison, is the golden boy of the sport.

Jock Serong’s wonderfully-named book is an object lesson in making the reader care about an ostensibly unsympathetic character. Darren’s not an out-and-out baddie, you understand – just someone who has an unerring ability to make wrong calls and hook up with the wrong people. He’s clearly brassed the wrong person off big-time, as the book opens with Darren tied up in the boot of a car with a bullet in the knee and all too aware of what his likely fate is.

Darren is oddly likeable – brutally honest and well aware of his own shortcomings. His chaotic life is in stark contrast to Wally’s textbook life with respectable wife and cute daughter, and the ultimate position as captain of Australia.

At the heart of the book is the relationship between the brothers. The boys learned their cricketing trade in the back garden, fiercely encouraged by their single mother Pamela. And their rivalry continues into adulthood as they progress through the different levels of cricket up to the ultimate goal – representing their country.

Serong is an elegant writer who can move effortlessly from laugh out-loud funny to elegiac to downright touching. Darren’s laconic voice leaps off every page, in particular in the descriptions of the boys growing up and competing fiercely in the back garden where they are sworn enemies – but they have each other’s backs when they progress to club level and take on opponents much older than themselves.

Those of us who played back garden cricket and remember how seriously it was taken by all concerned will lap up every single run and wicket in this book. Even if you’re not a sports fan, there’s much to hook you with laidback storytelling and a picaresque cast. Serong keeps the tension high with that central conceit of a man racing towards a sticky end – and there’s a twist in the tail that I didn’t see coming.

The Rules of Backyard Cricket is an unusual crime novel, but one of the best I’ve read this year. Baggy green caps off to Jock Serong!