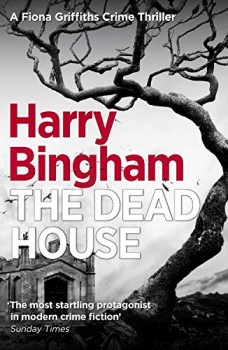 The discovery of a woman’s body, dressed in white and laid out in a candle-lit ‘death house’  in a Welsh valley church sets Detective Sergeant Fiona Lewis on her most baffling case.

Fiona Griffiths is as mad as a box of frogs. She talks to the dead, she is depressed and psychotic. A combination of uncertainty, bravado, disregard for authority, combined with insight and organisational ability, makes her a totally unsuitable, yet strangely effective detective.

Fiona, with her toughness, courage and a willingness to put her own life on the line to get justice for her dead ‘friends’, is one of the most unique, startling and compelling protagonists in modern crime fiction. Now a Sergeant with the South Wales CID, she suffers from Cotard’s sydrome, a rare but serious condition in which depression and psychosis bring about a form of depersonalisation – sufferers often believe they are dead.

Much of Bingham’s fascinating series – this is Fiona’s fifth adventure – is taken up with her attempts to become ‘normal’ as with her crime solving. But half-fey, half female, it is her ability to stretch normal which makes her both a complete maverick and a fine detective, held together by her love of justice.

Fiona is slowly succeeding, aided by her search for her own background – she is an adopted child, according to her one-time Cardiff gang boss ‘father’ found on the back seat of his open top Jaguar – but it is soon clear that her condition allows her to see things other do not.

The story opens quietly. In the wrong place at the right time, Fiona comes across a woman’s body, carefully dressed in white, holding a Bible and reverently laid out in the candle-lit ‘bier house’ of a Welsh valley church.

All efforts to identify her fail, but throw up a possible link to a local teenage girl, missing, believed murdered. Starting with a body without a crime and a crime without a body, Bingham builds the tension, reintroducing the cabal of ruthless criminals from his earlier stories.

In the savage and wild countryside of the Brecon Beacons, which he draws so brilliantly and often poetically, anything seems possible. A small and isolated community of monks; a long running kidnap for ransom scheme targeting the children of rich Eastern Europeans; the intricacies of elective plastic surgery. All have their part to play.

If you are as claustrophobic as I am, a brilliantly written caving sequence will make your skin crawl and offer a real test of the sheer power of the story to keep you reading, as Fiona and a colleague are trapped underground. But that’s hardly the only frightening sequence as the ever-curious, near sociopath Fiona constantly changes direction, although to her the path she is following appears straightforward.

Danger follows insight, and her sheer resilience required to recover and continue her fight for justice leaves the reader quite breathless. Fiona, who holds it all together, an intelligent although damaged character, is portrayed with sympathy and psychological depth – a strong and determined woman searching for identity in a tide of darkness which often threatens to engulf her. In real life Cotard’s sufferers are often suicidal.

The supporting characters are equally convincing, particularly her police superiors, and Bingham’s comments on family and community offer an interesting sub-plot. This is as good, or perhaps even better, than her earlier adventures.