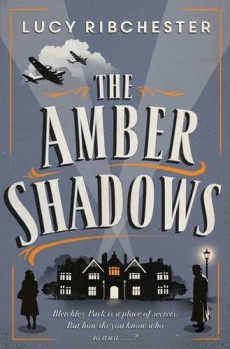 Honey Deschamps works at Britain’s wartime top secret intercept and decoding centre. Somebody starts to send her parcels of amber, apparently from a looted Russian palace. Who is responsible, and in a place where everyone keeps secrets, who can she trust?

Fans of The Imitation Game, the 2014 American historical drama thriller film based very loosely on Andrew Hodges’ biography of code-breaker Alan Turing, will love this. And in truth, there’s a lot to admire. Ribchester’s research is excellent and she captures the manic atmosphere of the centre and its polyglot staff brilliantly.

The constant pressure for results, the brutal hours, the claustrophobic secrecy and fear, all build a realistic picture which take the reader into the heart of the Buckinghamshire manor which was a vital key to success in World War Two. And carefully observed details such as the often appalling billeting arrangements, rationing shortages, the language and slang of the time, popular actors and films, build an authentic 1940s scenario.

The divide in status, pay and conditions between the sexes – the male code-breakers with their university backgrounds and eccentric behaviour and the type-x ‘secretaries’, without whose round-the-clock, repetitive labour transcribing decrypted German signals the centre could not have functioned – is also faithfully portrayed.

Honey Deschamps is one of the Hut 6 type-x girls. As she walks to her billet in the blackout, she meets a stranger who gives her a package. She assumes there has been some not uncommon postal error. But the parcel, which has Russian postmarks, contains a small piece of amber, possibly from the looted Amber Room in the Catherine Palace in Leningrad, now held by the Germans. As more packages arrive, some engraved with what appears to be a code, it becomes obvious someone is trying to get a message to her, but who? And this is where the plot begins to unravel.

Honey, the main character, frankly does not appear too bright and seems balanced on the edge of paranoia. Even when things are shown to be not what she believes, she tries to cling to her original beliefs although she has no way of knowing whether they are correct or not.

Her life has been dominated by her older ballet dancer brother. He has told her that her real father, who died before she was born, was a Russian musician who returned there and became guardian of the Amber Room. Could the packages be her father reaching out to her and what is he trying to tell her?

The story requires several massive stretches of the imagination. Mystery packages delivered to a woman at a top-secret location from a city under German occupation? The security services and the Military Police sufficiently lax to take little notice of staff coming and going at will? How does a gagged Honey manage to carry on a normal conversation?

This saga of family secrets and lies could have worked really well, but loses its way in copious ballet references, too much extraneous information detracting from the action which could only be described as minimal until it suddenly bursts into a frantic and largely unbelievable conclusion.