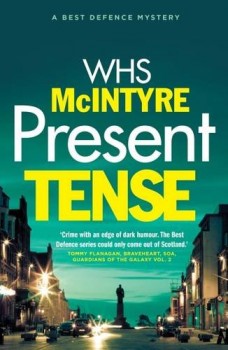 Lawyer Robbie Munro gets a visit from old client Billy Paris, who deposits a parcel for safekeeping. Several parties think Munro is in possession of information they are very keen to get hold of.

Robbie Munro maintains his practice largely with income from legal aid, doing his best to protect a range of minor villains from the accusations of the State. The decision of the Scottish Legal Aid Board to suspend him for inadequate procedural documentation is likely to seriously affect his income, even if his sole employee Joanna is still around to keep the firm afloat. After a visit from Billy Paris, however, legal matters get a backseat.

Billy’s parcel generates plenty of interest: it turns out that he knows something about the downing of a helicopter in the North Sea, taking with it pilot Jeremy Thorn and his girlfriend. Sabotage seems a possibility given that Jeremy’s father Philip is in dispute with a Secretary of State over the preferred site for a spaceport, and with musicians over contract rights, amongst others. A popular TV presenter takes a big interest in the case and gives Robbie some rather unwelcome exposure.

Robbie spends most of the book trying to work out whodunit, and how he can get paid for retailing this information to the highest bidder. Meanwhile, ongoing legal cases call for careful consideration. Joanna fears the worst for a client accused of rape, the only man in a locked house at the time of the alleged offence. Munro’s worst dilemma, however, may be his inability to purchase a Pyxie Girl doll in time for Christmas, something which would gravely disappoint his four-year-old daughter.

Despite the murders at the heart of the plot, this tale comes with a heavy lacing of humour. Munro frequently flies rather close to the wind, but his life is disorganised in an agreeable sort of way and he has plenty of interesting company. This includes his father, in whose house he lives, footballer brother Malky, daughter Tina as already mentioned, and the odd girlfriend. Joanna is an obvious candidate for romance, but it is part of Robbie’s charm that he seems determined to overlook this.

As a keen fan of the courtroom, I was a little disappointed that although much of the activity centred on the courts, we heard little by way of legal dispute or drama from persons in wigs. Given that the author has extensive experience in the field, it would be nice to get more in future outings.

However, Robbie’s temporary loss of legal aid work gives him the opportunity to act more like a PI, chasing down leads and attempting to bluff the other players with a non-existent hand. The author rather underplays the drama, but there is certainly enough here to keep the reader entertained until we find out whether Munro can really expose the criminal and get richly rewarded for doing so, a very enterprising combination.