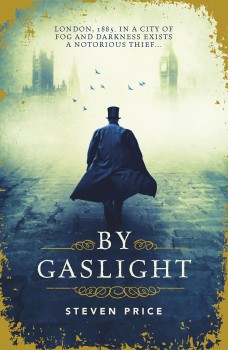 American detective William Pinkerton is in London following up his father’s obsession with ‘phantom’ crook Edward Shade. So is gentleman thief Adam Foole, responding to a letter from a long lost love. The woman is brutally murdered – and when Foole discovers Pinkerton was one of the last to see her alive, their paths are bound to cross.

Canadian poet Steven Price has taken a long, complex, but utterly compelling 19th century story and applied the rules of modern mystery writing to it. The result is something unique. But it is his gift for unravelling this terrific yarn, in a literary style often reminiscent of William Faulkner, that makes this stand out from the ordinary.

This sweeping and dark tale of love, betrayal and revenge reaching from the slums and drawing rooms of Victorian London to the rough and tough diamond fields of South Africa, with its flashbacks to the mud, blood and terror of the American Civil War, is a marriage of historical suspense and literary sophistication.

While wholly contemporary, this combination of quest, grief, betrayal, and identity, with its powerful cast – all half-mad and twice as dangerous, there are no heroes here – echoes the very best of the great ‘three-decker’ Victorian crime novels.

William Pinkerton, son of the founder of the American detective agency, is in London in the 1880s to pursue unfinished business, his late father’s obsession with Edward Shade, a fabled conman and thief who seems to exist only as a phantom.

The lead he is following is a woman. But when she turns up murdered, her head in the Thames and her mutilated body discovered on both sides of the river, the gruesome, eerie events that unfold during the search for her killer are given haunting life in a story perfectly grounded in period and rich in incident and image.

Pinkerton is no armchair detective. A cross between Harry Callaghan and Jack Reacher, he has never allowed his contempt for the law he serves to interfere with his deep-rooted search for justice, however rough.

Also in London, is Indian-born half-breed ‘gentleman thief’ Adam Foole, responding to a letter from his long-lost love with whom he lost contact after a diamond robbery in South Africa.

Both have difficult back stories, Pinkerton seeking to come to terms with his overbearing father, and Foole having had to survive poverty alone after the early death of his own father.Their paths cross when Pinkerton learns Foole could be a vital link in his search for the mysterious Shade and Foole discovers the detective was one of the last to see his former love alive.

The plot is labyrinthine and sometimes slow, but this in no way detracts from the tension – and the need for the reader to unravel the tangled strands of a story which takes you into the heart of smoky, filthy Victorian London with its sharply contrasting grit and glitter.

The story is told from the alternating perspectives of the two men connected by the same woman. Their cat and mouse game as both try to discover what happened to her,albeit for different reasons, is brilliantly supported by a cast of frequently infuriating, often unsympathetic, characters who combine to make this compulsive reading with a feeling of almost deterministic inevitability to what follows.

Two words of warning. You’ll need stamina to get through this massive, but darkly mesmerising tale worthy of any of the great Victorian thriller writers. And unless, like me, you grew up in the old East End, you’ll probably need a dictionary of thieves’ cant to sort out your shills from your uncles, your dips from your rampsmen and your jacks, cribs and your pokes from your ‘flash’, your peelers, canaries, chippies and screevers!