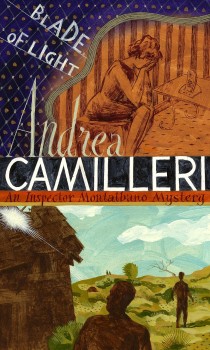 Inspector Montalbano is called to investigate the mystery of a house which appears to have had a door removed. It is eerily similar to a dream he had had the previous night. Later he receives a report of an attack on a woman. Will his dream turn out to be a prophesy of these events?

A small house is situated on the edge of a large and mainly barren piece of land. There is a report of mysterious happenings concerning its front door. The two Tunisians working the land nearby know nothing about it. Another report concerns an attack on a woman late at night and again there are mysterious circumstances.

When Inspector Montalbano begins to investigate these reports he is already disturbed by a dream he had had the previous night. When things escalate and a body is found near to the house, the dream appears to be becoming true. His new friendship with a local female art dealer seems to be another thing that unsettles his mind. Altogether he becomes more and more out of sorts.

This is a very introspective novel in which the reader begins to learn something about Montalbano’s past. In particular his long-term relationship with Livia comes into focus, including the story of an orphan adopted by them many years ago. All this is difficult to comprehend by those of us who haven’t read the early books, but it makes the characters all the more real. The author can see their development from the start and is gently bringing the reader up to speed.

Putting the relationship between Montalbano and Livia into context certainly adds depth to the novel. But it is hard to keep up with all the twists and turns of the various strands of the story: Montelbano and Marion, the art dealer; Montelbano and Livia and their history; the Tunisians, patriots or gun runners; the woman who was attacked; her friend and her brother. All these threads and more are very cleverly woven throughout the book.

Right from the start the writing captures the imagination. Indeed the first chapter is a brilliant play between dream and reality, even down to Catarella’s acting ability or not; a huge improvement on the way that Catarella is usually portrayed. The accent for once does not get in the way of the true character.

There are a number of very sensitive passages embedded in the novel, mainly concerned with the passage of time. Montalbano is concerned that he is mis-remembering names for example or that he is becoming more understanding. But at least he recognises that the former can be a very long process before the need for alarm, and that the latter might have been the effect of his friendship with a woman. So the negatives are well balanced with the positives, and all added to by the frequent references to wonderful Sicilian cooking. So once again this Montalbano mystery is a very enjoyable read which keeps the reader guessing right to the last page.