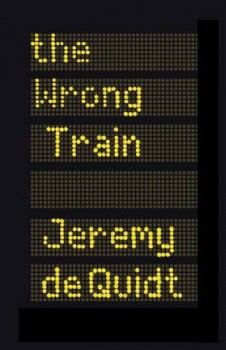 A series of eight spine-shilling stories linked by an equally creepy narrative set on a deserted platform next to a railway line.

It’s dark and the boy is in a hurry to catch the last train home. He jumps on just before it leaves the station and calls his dad to tell him to pick him up. The battery on his phone dies after the call, but he’s not worried. He’ll soon be home. But very soon he’s got more than a dead phone to worry about. There’s no one else in the carriage, and he realises that he’s not seeing any familiar landmarks out of the train window, and it’s already gone way past where he should have got off.

When the train finally stops at a station, he jumps off, hoping another train will soon come along to take him back the other way. But all that turns up is an old man with a scruffy dog. The man joins him at the station and insists on telling a series of creepy stories, even though the boy makes it clear he doesn’t want to listen.

The Wrong Train provides a clever and spine-chilling narrative linking a series of spooky and ingenious stories. The tone is set from the start with the heart-breaking story of Cassie, taken away from her home and friends when her mother is determined to make a fresh start after splitting up from Cassie’s dad and having a child by another man. Cassie’s resolve to have nothing to do with baby Niall is tested when a sinister old woman invades their lives and the tragic story of the infants of Weir Pond surfaces to haunt her.

Then there’s Sam and the lucky horseshoe charm he finds in the back of a dilapidated old monster of an American car that his parents have inexplicably fallen in love with, and even the knowledge that it has been half rebuilt after a fatal road crash doesn’t dampen their enthusiasm.

There are shades of The Innocents in the story of Sophie, babysitting two kids who bear a distinct resemblance to the scary twins from The League of Gentlemen. Tom and Lucy are certainly not innocent, though, nor are the games they insist on playing.

You’ll probably look at the pictures on your mobile in quite a different light after reading about how Sammie is driven out of her mind by strange photographs that only she can see appearing and disappearing on her phone.

Sara and Chris can’t sleep for worrying about a bird that’s fallen down their chimney, but when their father breaks through the brickwork to find it, all that’s there is soot, which soon starts to get everywhere.

Richard and his friends play a game called Dead Molly that will almost certainly give any child psychologists reading this book conniptions, and the final story in the collection will certainly put you off bringing home any old items of furniture.

I was glad I decided to read this book in a bright room in early afternoon. The eight stories are all macabre masterpieces, unsettling and creepy, making you view everyday objects and seemingly harmless events in an entirely different light. The stories are haunting in every sense of the word and will stay with you long after you’ve turned the final page.

The exchanges on the deserted platform between the unnamed boy and the old man kept reminding me forcibly of the classic film The Signalman, which frightened the life out of me as a kid and which I still won’t watch to this day. I just hope that today’s teens and young adults are made of sterner stuff than I am!