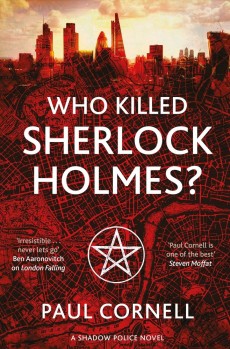 Sherlock Holmes has been murdered. That might not be so much of a problem but now there are a series of murders linked to Holmes stories set in London. So just how do you solve the murder of a fictional character?

Quill and the team are alarmed to discover that Sherlock Holmes (the real Holmes has been murdered) and now the London murders that Sherlock investigated are being recreated despite the best efforts of the team to solve them or stop them. It appears that London remembers Sherlock and his death is not enough to stop supernatural activity related to him.

This series is getting into its stride. Not as white-knuckled as the first one, the main players are starting to differentiate themselves enough that you start caring about what happens to them. Some on-going plot lines are resolved and a couple of new ones set up for future books.

Quill and Ross are the ones concentrated on, Ross dealing with the sacrifice of her future happiness and the betrayal of that sacrifice by Costain. Quill is depressed and working through a mental breakdown over the news that all inhabitants of London are doomed to Hell. I must admit that I did feel like slapping Quill at the beginning and telling him to get on with it. This would not be very helpful in real life, but is understandable when you can see how the team are struggling to deal with his absence

Ross gets involved with the Trickster god of London, who is currently an actor in one of the Sherlock Holmes productions. I found him to be less of a real trickster and more annoying to be honest. Imagine dealing with someone who cannot answer a straightforward question truthfully.

Lofthouse is mostly absent from the main investigation, as she is trying to discover the history of the old supernatural team with an entity that has a particularly nasty way of getting her to stop.

Despite dealing with the filming of the three current versions of Sherlock Holmes, the book is mercifully free of real celebrities having an impact.

More engagement with the supernatural community is good, but the team are stupifyingly slow at getting information. I do wonder how the undercover guys actually managed to survive in the real world if they're that slow at finding out things and getting strangers to trust them.

This is an enjoyable and exciting adventure. The concept behind it is very good and I enjoyed the insights into the old supernatural investigation team and why they failed. This book, however, is built on the last two and should not be taken as a starting off point for the series.