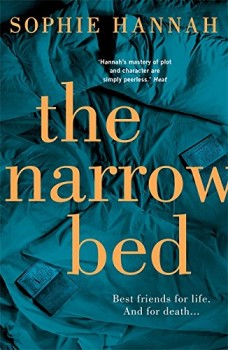 Two pairs of friends are murdered shortly after each received a small white book containing matching lines of poetry.  The question is whether Simon Waterhouse and his team will solve the crimes before there are any further deaths.

Sondra Halliday writes endlessly about misogyny. So when two pairs of friends, three female and one male, are killed, she and others on social media assume that the killer is a man. The police team have already given him a name ‘Billy Dead Mates.’ But Simon Waterhouse is keeping an open mind, aware that before each killing the victim has received a small white book containing lines of poetry. When this is eventually made public, Kim Tribbeck, an author and well-known stand-up comic, remembers that she too was given such an item after one of her gigs.  Does this mean that she is about to be killed?

The book focuses almost totally on the process of solving the crime with only minimal diversions to other events. The time is taken up throughout the book with the thought processes of the main characters. Whether it is those of Simon Waterhouse and the police team brainstorming all possible theories at the start of the investigation; or Kim Tribbeck, writing her story Origami, or struggling with her visits to her dying grandmother, or re-visiting the venues of her past gigs with Charlie, Simon’s partner; or indeed Charlie herself when on the trail of her sister, trying to discover what she is doing that is so secret. The reader lives in the heads of these characters.

Following a start that seems to flit from one piece of writing to another, it was a relief in the second chapter to find the traditional structure emerge of murders to be solved by the police. The police team, led by ‘The Snowman’, is well-known from previous books by Sophie Hannah. The main character in the team is Simon Waterhouse, although he is anything but a team player.

The seemingly random pieces of writing at the start gradually fall into place although the identity of two of these writers never becomes apparent. The conversations, sometimes between people in meetings, and sometimes in the head of an individual can appear rather slow and pedantic but the whole is nevertheless strangely addictive. The lack of action doesn’t seem to be a problem until the end when the denouement is a bit of a disappointment. Indeed, there is a strange lack of tension throughout the book which may be a factor in this disappointment, although this lack of tension was amply made up for by the intrigue. In some ways the underlying message of the book feels of greater importance than the plot.

However, the writing is wonderfully fluent and the characters all very believable. The structure is traditional, the context is modern and the plot complex and intriguing. The Narrow Bed is overall a good read but may be best read in several short sessions with time in between to properly absorb the complexities.