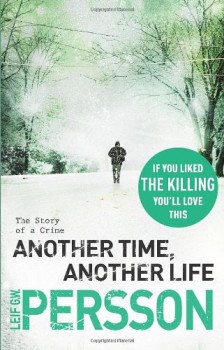 Another Time, Another Life

Another Time, Another Life features a series of seemingly unrelated incidents - the 1975 siege at the West German embassy in Stockholm opens the book, followed by the 1989 murder of a civil servant. Jump to 1999 and the files on the former are being reopened. Oh, and the murder of the Swedish prime minister in 1986 and the fall of the Berlin Wall are all in there somewhere …

This is the dark side of Sweden, with assassinations, terrorism, murder and kidnappings, all presided over by  bumbling, corrupt police. But in case you reckon this is just another same old, same old dose of gloomy Nordic noir by a Stieg Larsson wannabe, think again.

Leif Persson, whose day job is apparently a psychological profiler, has a laconic and sardonic style which sets Another Time, Another Life apart from most of the Nordic pack. It's certainly not your run of the mill crime novel, in that there is virtually no action once the early scenes have gone, and we're lead down a lot of byways. It's a tribute to his writing that, given the talky nature of the book, only the middle section flags, as it becomes a history lesson dump on what happened in the former East Germany.

The characterisation is, um, different … The bigoted cop Erik Backstrom, who couldn't find his own backside with both hands, a torch and a roadmap, is little more than a caricature. Lars Johannson, whose move to the Swedish Security Police in 1999 sparks the re-opening of the siege enquiry, is under-drawn, as are Detectives Bo Jarnebring and Anna Holt. Johannson is said to be a crack investigator, and his two colleagues are at least competent. But there's a lot of tell and not much show when it comes to gauging their abilities.

The book is translated by Paul Norlen - and there we encounter the problem of markets for translated fiction. This version is thoroughly American, and as a result sounds slightly 'off' to a British ear. So it's hard to judge whether some clunky dialogue is down to the writer or the translator.

Another Time, Another Life, is what my grandmother would have called a rum do. It's clever, unusual, and I've already hunted down Persson's other books. But it's in need of an edit to pace it better and to tie the disparate sections together a little more smoothly.