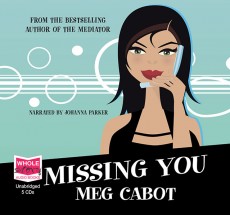 Jess Mastriani’s power to find missing children has deserted her, but that doesn’t prevent ex-boyfriend Rob Wilkins from turning up on her doorstep asking for help finding his missing sister.

Jess Mastriani is just an ordinary 18-year-old. She’s sharing a flat with friends in New York, working part-time while attending a prestigious music college. But life was far from ordinary when Jess was 16. At that point she still had a mysterious power that started when she was struck by lightning, which enabled her to find missing children. All Jess had to do was see a photograph of them and she would then see their location in dreams.

Naturally, the government wanted to get in on the act, and Jess ended up working for them, finding the people they wanted her to locate. But after spending time in Afghanistan, Jess’ powers deserted her and she was brought home, just an ordinary girl again, trying to pick up the pieces of her life, and trying to forget Rob Wilkins, her former boyfriend. The former boyfriend she broke up with after seeing him kissing another woman. Or possibly being kissed by another woman. Whichever it was, Jess wasn’t impressed.

So when Rob turns up on her doorstep in New York, asking for her help in finding his missing sister, Jess isn’t exactly pleased. She’s over Rob – or likes to believe she is – and she’s certainly not Lightning Girl any more. But Jess has never been one to run away from a problem, so against her better judgement, she goes back to her home town with him to help if she can.

The 1-800-WHERE-R-U was always somewhat the poor relation of Meg Cabot’s various series, playing second fiddle to both the Princess Diaries and the Mediator in popularity, possibly because both Jess and Rob always comes over as rather more ordinary than Cabot’s other main characters. But despite that, or maybe even because of it, I enjoyed the books when I first read them, and was very happy to discover that a final book in the series had been produced that I wasn’t aware of, and that it was available on audio, with narrator Johanna Parker, who has always done such an excellent job of bringing Cabot’s characters to life.

Johanna Parker is a versatile narrator, handling Rob Wilkins with the same ease as she does with Jess, and doesn’t fall into the trap of making the men sound like they’ve got a heavy cold and a sore throat. This is very much Jess and Rob’s story, and she does equal justice to both of them.

Even if this is the first time you’ve encountered Jess Mastriani, don’t let that put you off. Missing You is a self-contained story that provides enough back-story to make you feel at home, without plunging you head first into an info dump. As ever, Cabot provides a stylish and entertaining story with a sparky narrator and characters who come alive in her capable hands, and it was great to see Jess and Rob again and for their story to get a greater degree of closure.