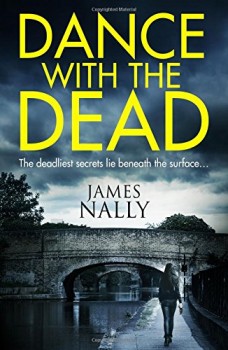 Dance With The Dead

A woman’s mutilated body gives PC Donal Lynch a possible way out of the Cold Case Squad and back onto an active murder investigation.

London, 1993. Donal Lynch hasn’t exactly covered himself in glory during his short career in the police. He’s been shunted sideways into the Cold Case Squad but still dreams of being a detective – when he gets to sleep, that is. For Donal – pronounced dough-nal – sleep is in short supply. He’s been a chronic insomniac for years and even industrial quantities of red wine aren’t much help.

That’s not his only problem, either. Donal sees dead people; usually murder victims he’s been close to, but that’s not been much help in his career, especially as a brush with a dodgy shrink has ended up with him being dubbed the ‘psychic detective’. That’s the sort of publicity his bosses could do without, hence the sudden sideways move into trying to make sense of a series of violent murders of women in London, all of which got shelved without much progress having been made.

Donal has been given a brief to get involved in any crime scene where the modus operandi bears any relation to his cold cases, which gives him an excuse for muscling in on the case of aspiring actress Elizabeth Smart when her horribly mutilated body is found in north London.

Bodies are certainly not in short supply in Dance with the Dead. One gruesome killing is nowhere near enough, and at times it feels like the violence against women is being thrown in just for the shock value rather than to further the plot. Donal Lynch lurches rather haplessly from one crisis to the next, and it’s not hard to see why his bosses want him somewhere he can’t do much harm. He tends to be followed closely by his journalist brother Fintan, who’s happy to drive a horse and cart noisily through any notion of ethics when he’s in pursuit of a story.

Donal is also hampered by the fact that his father, a Republican activist who disowned him when he joined the police, has turned up in London and is currently sleeping on the sofa in the flat Donal shares with his brother. His mother desperately wants them to patch up their relationship, but Donal just wants his sofa back.

James Nally’s characters are, almost without exception, a distinctly dislikeable bunch. Donal gets dragged along by the scruff of his neck by his unscrupulous brother and doesn’t put up much of a fight, and Fintan foreshadows the very worst of recent media scandals. The police all act like something from The Sweeney and the main villain is yet another incarnation of one of the Piranha brothers. The only likeable one of the bunch is a violent villain who won’t tolerate cruelty to dogs!

I still can’t make my mind up about this series. I'm always drawn to crime with a supernatural angle, but here the woo-woo contributes almost nothing to the plot. You could edit it out and end up with a book that’s very little different. Nally’s writing is slick – almost too slick in places, as the throwaway lines come with the rapidity of machine-gun bullets – and the plotting is sound, but I would prefer at least one character I could genuinely like. And if the spooky stuff is going to be a selling point, it’ll need to go beyond the occasional apparition metaphorically rattling a few chains and giving Donal the screaming hab-dabs in the middle of the night. The series hasn’t yet lived up to its promise, but I haven’t quite lost all hope.