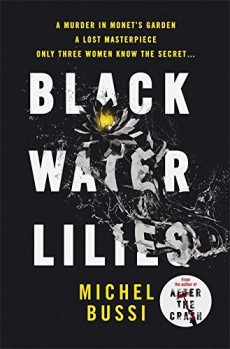 Set in the home village of the artist Claude Monet, it’s the story of 13 days that begin with a murder and end with another. What is the connection with rumours about a painting of black water lilies?

Set in Giverny, the picturesque home village of the artist Claude Monet, the story begins with the murder of a local ophthalmologist and art collector. At the centre of the mystery are three women who share a secret and all dream of leaving the peaceful but secretive village.

As well as murder there are rumours of a lost masterpiece; a painting of black water lilies. Detectives Serenac (intuitive and clever) and Benvides (methodical and organised) have differing techniques that compliment and contribute to each other’s approach to the investigation. They cannot make up their minds if the murder was a crime of passion, something to do with art and money or somehow involves children. It doesn’t help matters when Serenac falls for one of the suspects.

Bussi presents us with a clever plot as intricate and delicate as a Monet painting and like a Monet painting reality is presented impressionistically. It is a sophisticated and compelling tale that Bussi leads us through, but just when you think you may be getting to the bottom of the mystery he offers up another clue or revelation that plunges you into a long shadow of doubt and takes the story to another level. He is a consummate storyteller and it is easy to forgive him for at times teasing us. Not a word is wasted in the gradual reveal of the truth behind the events involving the residents of Giverny. It is testament to the translator’s skills that you forget that the novel was originally written in French; except that the occasional exclamation like “Christ alive” doesn’t quite ring true.

This is not just a murder mystery, but it also explores the intensity of childhood friendships, demonstrates the madness of being in love and questions our perceptions of fine art. Because of this the novel will appeal to the reader whose usual fare does not include murder stories and for those who enjoy the genre it will refresh the palette.