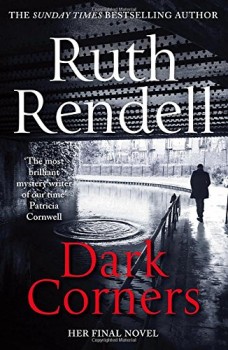 Carl, a young writer, sells a friend some slimming pills which inadvertently cause her death – then blackmail and murder follow.

Stacey is a young actress with a weight problem. Her friend Carl has inherited a bathroom cabinet full of pills and potions from his father, so he sells her some slimming pills – which inadvertently cause her death.

Rendell’s strengths are her ability to convey the absolute ordinariness of London life and its people. Roads and mews that don’t exist seem to merge seamlessly into the city. And murder springs from the every day and from apparently mundane incidents.

Dark Corners isn’t Rendell’s best book by quite some way. It’s an easy read, but for once with Rendell I didn’t feel any sympathy with any of the characters. Carl is a thoroughly wet young man – why his girlfriend Nicola gives him a second chance is never convincingly explained. He is a writer and there is much angsting over his reputation, despite the fact he doesn’t appear to be particularly successful. Lizzie, who inveigles her way into Stacey’s flat, is a freeloader and liar; Dermot the lodger is a hypocritical Holy Joe …

And there are a number of random incidents, including a bomb and a kidnapping, which aren’t woven into the narrative as satisfactorily as you would usually expect from a plotter of the quality of Rendell. Lizzie’s long-suffering father toddles round London by bus now that he is retired, but the plot strand doesn’t offer anything particularly useful or revealing. And what could have been a key element involving Lizzie charges down a dark alleyway and stays there.

Rendell’s ability to wrap menace up in the everyday world is never more obvious than in Dark Corners. But the book also shows some of her shortcomings – a rather old-fashioned tone in places, some stilted dialogue and a faintly uncomfortable attitude to portraying the working class characters.

Dark Corners is a fairly effortless read and even though it isn’t Rendell at her best, it reminds us just what a considerable talent we have lost.