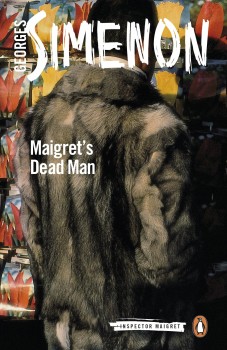 Maigret has to choose whether to believe a woman who thinks everybody is trying to poison her and a man who rings him out of the blue, asking for his immediate help.

The book opens with Maigret in his office listening to a bejewelled, mink-coated, hugely over made-up woman telling him how her family are seeking to poison her. “Listening” is hardly the word because he has already made up his mind that she is a time-waster and he is grateful when his telephone rings.

It is from an unknown man who tells Maigret that he is being followed by a number of people who want to kill him. Maigret uses one of his inspectors, Janvier, to try to track the man down, but he appears to be moving from one café to another, each time ringing Maigret again and begging him to help. Eventually the calls cease and later a man who turns out to be the caller is found lying dead in the Place de la Concorde. Unaccountably, Maigret feels a strong sense of attachment to this unknown man and determines to find his killers.

This is rather a different book in some respects. It is longer than most by about a third and has more of Maigret's staff involved - Lucas and Janvier, for example - as well as Judge Coméliau and DCI Colombani of the Sûreté   Even the normally invisible Mme Maigret is given the opportunity to express herself from time to time. There is no doubt that this extra length, together with the inclusion of more characters, makes for a more convincing plot and adds to our knowledge of people we think we already know.

There is an added realism as Maigret, in order to solve the case, finds himself more and more dependent, not only on his own colleagues, but also on the rival Sûreté, with whom, for once, he is happy to cooperate. This doesn’t mean that the flashes of inspiration typical of Maigret are absent, but they are less frequent as the novel includes much more in the way of routine police procedure.

The plot takes us in an unanticipated direction as Maigret attempts to answer two questions. First, why, if the murderers wanted to conceal the body, did they leave it in the Place de la Concorde of all places? Secondly, what can possibly be the motive for the murder of a man who appears to be quite ordinary and was not in any sense wealthy? It is only when Maigret begins to see a link between this and other crimes that he makes any progress with the investigation, in spite of the man hours already spent on it. The connection becomes established only because Maigret, being Maigret, is prepared to devote all his waking hours to thinking about the crime and the murdered man, for whom he has developed a real human sympathy.

As usual, when Maigret spends all his time in Paris we are given a vivid sense of the city – particularly of the number of bars and restaurants it contains, with most of which he seems to be familiar. We imagine ourselves riding with him on one of his frequent taxi journeys, with only an occasional thought about his expenses claims, or visiting one of the sleazy hotels in the foreigners’ quarters which should have been “burned down long ago along with their colonies of fleas and lice from every country on earth.” Whether Simenon would have used such language today to describe an immigrant quarter is doubtful, but it is strongly evocative of Paris in the era in which he was writing.

This is a novel particularly to be recommended to those unfamiliar with the work of Simenon. It catches the reader’s attention on the very first page and maintains it throughout. There are, perhaps, one or two occasions on which the great detective is a little too knowing, where belief is somewhat strained, but the excitement as the story develops never flags.