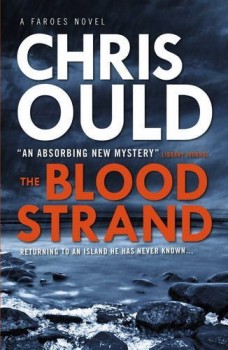 Jan Reyna, a British police detective, returns to the Faroe Islands where he was born when his estranged father is found unconscious in a car, with a shotgun by his side. Traces of someone else’s blood are found at the scene.

We are not that familiar with Faroes, a self-governing archipelago, part of the Kingdom of Denmark, comprising 18 rocky, volcanic islands between Iceland and Norway. And neither is Jan Reyna who left the stunning but harsh terrain with his mother when he was three, first going to Denmark, then to England. He refused to speak the language as he was sure he would never go back to this childhood place and to the culture and harsh living conditions.

Yet now he is compelled to return when told that his old estranged father Signar Ravnsfjall is found unconscious in a car, with a shotgun by his side. The police find traces of someone else’s blood at the scene, and then a young man’s body is washed up on an isolated beach. Thrown into the mix of these seemingly unconnected events are a disappearance of unhappy teenager Noa, and a strong suspicion of blackmail.

Initially Reyna isn’t involved in the investigations but as a close relative to people affected by these events, and with his experience as a British murder squad police detective, he gets gradually pulled into the case by the local detective Hjalti Hentze with whom he finds a common language. Both men work in a similar way and can compare notes, especially as due to the isolated location some specialists have to be flown from Copenhagen. Their mutual respect grows as Reyna also slowly starts understanding that there is something innately conservative about Faroese people with their polite respect for privacy. Which of course makes it more complicated when dealing with the sinister events.

Reyna is drawn back to the bleak but fascinating landscape which reflects his own mood, the black dog of depression that he tries to fight. He reluctantly wants to learn about his family, the reasons behind his mother’s flight from the Faroes, and her subsequent suicide. But as Signar’s condition doesn’t improve in the hospital Reyna cannot ask him questions about the complicated past, about his only trip back when he was 17 and had a fight with his father, and needs to deal with his anger, resentment and sadness of unfinished business in a different way. He meets his half-brothers: easy-going Kristian and hostile Magnus, and rekindles his friendship with cousin Frida. He discovers the way local people live on these magnificent, remote islands and how this heritage might have affected his personality. Most of all Reyna is trying to come to terms with his own history and decide where he belongs.

Chris Ould’s novel is beautifully written, tense and a touch melancholic, atmospheric and full of delicate mysteries that keep you guessing about Reyna’s life and wondering at how different background and traditions shaped his character. We don’t get a full picture and not enough answers but that’s kind of a promising bonus. The Blood Strand is the first book in a trilogy so there’s the prospect of more insight and unravelling of secrets.