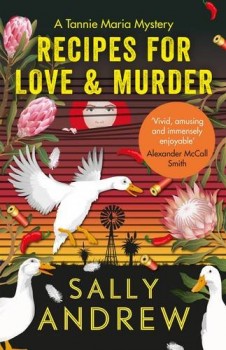 Tannie Maria runs a cooking and agony aunt column in her local newspaper, the Klein Karoo Gazette. When a correspondent is found killed Tannie must put all her common sense and cooking skills to find the murderer.

There is an awful lot of food in this book. The heroine cooks in practically every chapter, but, possibly despite this, Sally Andrew serves up an interesting and engaging take on small town South African life. The characters are all well observed and well drawn. For all the slightly twee premise (an agony aunt prescribing recipes to solve petty life problems), Andrew manages to ground the crime and investigation in reality.

The question of how an amateur sleuth gets involved is neatly dealt with by having an ambitious would-be investigative reporter on the staff of the Klein Karoo Gazette, and by the fact that the police aren't too happy with Tannie Maria's interventions. Andrew handles this deftly with the addition of a will-they won't they romance between Tannie and the police detective in charge of the investigation.

There are enough twists and turns here to keep the mystery interesting and a wide variety of local characters including a garden centre owner, some Seventh Day Adventists and the husband and lesbian lover of the victim. These last two provide darkly comic relief as they blame each other for the murder throughout the book. Behind all of this there is a real murder and real threat and violence that provides a dark edge to the story.

I think this dark edge is what, in the end, makes me dissatisfied with the novel. Andrew wants to have her cake and eat it. She wants a world where the right recipe can mend a broken relationship and a stew can be used as a way to get someone to open up and tell the truth, but she also wants to depict real violence and real threat. I think that doesn't mix well. Another irritant was the use of Afrikaans without a quick translation. I'm happy with non-English words and phrases, but not when they render the sentence incomprehensible as occasionally happened.

All in all, it's a competent and entertaining enough murder story, but I'm not sure the recipes play well with the murder.