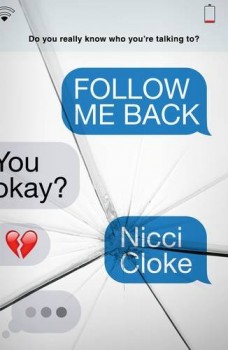 Lizzie Summersall has disappeared and it’s the talk of the school.

Aiden Kendrick learns of the disappearance of his friend, Lizzie Summersall, when the police turn up on his doorstep, asking questions. Aiden claims he’s not had much to do with Lizzie recently and says he can’t help them, but it’s clear that the police think Aiden knows more than he’s telling them.

Abbots Grey, where Aiden lives with his mother and wealthy stepfather Kevin, prides itself at keeping up appearances, as does Aiden’s school, St Agnes’s, known to its pupils as Aggers. Hyacinth Bucket would have felt very at home there! The area is also home to the popular reality TV show, Spoilt in the Suburbs, in which Lizzie’s sister Francesca – Cheska – has a part. Lizzie’s disappearance is a hot topic at Aggers and Cheska is quick to exploit that on screen.

It soon becomes clear that Lizzie had a very active online life, spending a large proportion of her time on social networking sites like Facebook where she was absorbed in friendships that both the police and the press were quick to label as flirtatious. Marnie, one of Lizzie’s friends, is determined to do something to help find her friend and ropes Aiden in to helping her take a closer look at their friend’s online life.

The majority of Follow Me Back is narrated by Aiden, interspersed with online conversations, both past and present. Devices like that can often fall flat in books, but Nicci Cloke pulls of the difficult trick of making these come over as authentic, and even the references to Spoilt in the Suburbs make it seem real enough to join the endless procession of cheap TV shows thrown at us on screen. After all, when something called 100 Year Old Drivers Rebooted can be served up with a straight face on the TV schedules, Spoilt in the Suburbs comes over as both believable and restrained! In addition, the school setting is well-drawn, although the easy acceptance of American imports such as ‘proms’ does make me feel my age at times!

It’s obvious fairly early on that there’s an element of unreliable narrator in Aiden, but Cloke generally plays fair with her readers as the story unfolds. In its latter stages, there are perhaps slightly too many changes of narrator, giving the book a rather uneven pace, but despite that, Follow Me Back is a strong story of the pressures placed on teenagers by social networking sites. Faced with a constant barrage of friend requests from people who barely even come into the category of vague acquaintance, let along friend, it’s easy to get sucked into a life that at times bears little resemblance to reality, something which Nicci Cloke exploits to the full.