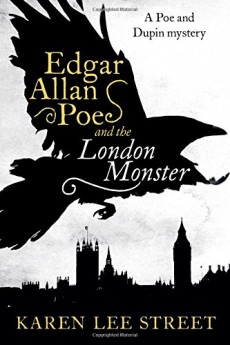 Edgar Allan Poe, the American writer, editor and literary critic, was hardly the most stable of men. Although regarded as a central figure of American literature and inventor of the detective fiction genre, he is often represented as a mad genius or tormented artist exploiting his personal struggles. Many such depictions blend with characters from his stories, suggesting Poe and his characters share identities.

Karen Lee Street has taken full advantage of both traits. One of his most famous characters, the French detective le Chevalier C Auguste Dupin, appears here as a real person, scarcely more ‘together’ than Poe himself – in fact, almost a mirror image of the jittery, death-obsessed author.

Their complexes, phobias and insecurities all add to a superbly morbid, dark and Gothic mystery. Clever, witty, and wonderfully researched, it offers a re-imaging of the salient details of Poe’s life, and the repositioning of his relationship with his finest creation.

There are plenty of tricks, hints and allusions to Poe’s work – I caught those to The Raven, Murders In The Rue Morgue and Fall Of The House of Usher – which add a layer of reader participation. And the use of the infamous case of the ‘London Monster’ – either a sick individual or a group who terrorised the capital’s fashionable women some 70 years before by slashing their backsides – adds another layer of interest.

Poe has summoned Dupin to London in the hope the great detective can help him solve a family mystery. He has inherited a box containing letters which appear to implicate his actor grandparents to the Monster’s crimes. They set out to prove the missives forgeries. But as they delve deeper, past horrors emerge and they begin to suspect they are being watched. Who are their stalkers and what is their connection to the Monster?

It’s beautifully constructed with some lush prose, alive with the feel of the period, and all the darkness, violence and treachery one would expect of Poe himself – who some readers may well find one of the more objectionable characters!

This is a dark, but very satisfying mystery, combining first-class writing with suspense and unease and perfectly set in an authentically Dickensian London. This is also a hugely intelligent literary crime thriller which will keep you guessing throughout – and promises to be the start of a series featuring Poe and Dupin in the years before the author’s own mysterious death in 1849, found wandering and dying in a Boston street wearing someone else’s clothes!