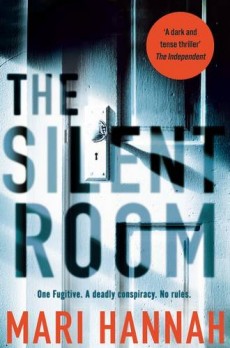 A Special Branch officer, believed to have gone rogue, is taken from a hijacked prison van after being refused bail. Most believe DI Jack Fenwick has been sprung by his dodgy mates, but his former sergeant believes he’s been taken against his will and is an innocent man.

I’ve always enjoyed Mari Hannah’s DI Kate Daniels series, set against the ever-scenic backdrop of Northumberland, but in a new standalone, The Silent Room, Hannah has raised her game even higher to produce an absolute page-turner of a book. The characters positively leap out at you and the story hits the ground running with the assault on a prison van carrying the supposedly bent Special Branch officer DI Jack Fenwick, caught with a couple of illegal shotguns in his possession believed to have come from some friends from the wrong site of the tracks.

The hijackers mean business, and it’s a well-executed raid, leaving Detective Superintendent Eloise O’Neil, of the Professional Standards division to pick up the pieces. Her bagman, the lazy, insubordinate and vindictive DS John Maguire, is convinced that Fenwick has been sprung by his dodgy mates, but the flip side to this is that Fenwick’s best friend and colleague, DS Matthew Ryan, is equally as convinced that his former boss is innocent of all charges and has been kidnapped against his will.

When Ryan is suspended on a flimsy excuse and frozen out of the investigation, he vows to Fenwick’s family that he’ll find Fenwick. The only question is whether his boss will be dead or alive. With some help from his former girlfriend and even more help from his former boss, retired copper Grace Ellis, Ryan delves deeper and deeper into Fenwick’s kidnap and tries to piece together what his boss had been working on, which isn’t easy, as Fenwick had been keeping everyone in the dark and, to make matters worse, his notebooks have gone missing.

One of the things that really impressed me about The Silent Room was how quickly all the various characters were established. Within the space of a few short chapters, I felt I’d known all the protagonists for ages. Loyal, determined Ryan, doing his best to stay within the law, even when he’s been shut out of everything that matters to him. Ryan’s sister, Caroline, blind from birth, but able to offer some unique insights into the puzzle facing her brother. Grace Ellis, already bored silly with retirement and fighting like a mother bear to protect her unlikely cubs. Ex-spook Frank Newman, who knows more about operating on the shady side of life than anyone, and has history of some sort with Ellis that neither of then are willing to talk about. And Jack Fenwick himself, a man who knows he’s in deep shit, but still won’t stop fighting to stay alive.

This motley crew are determined to clear Fenwick’s name and return him to his wife and family. They’re pitted against O’Neil, a woman doing her best to remain impartial in the face of some quite damning evidence and Maguire, a man who wouldn’t know how to be impartial if his life depended on it. O’Neil has all the resources available to her and should, in theory, be streets ahead of Ryan’s unofficial investigation, but Ryan has the advantage of being certain of his boss’s innocence, and he’s determined to prove it.

The trail leads them all to some unexpected places in a cleverly plotted and never predictable race against time. It took a long time before the disparate threads of the story started to come together, and I was utterly fascinated to see how Hannah was going to draw it all together. She succeeded magnificently, leaving me hoping very much that The Silent Room turns into more than simply a standalone. These characters deserve to come back and both O’Neil and Ryan would make strong series leads. And as ever, the bleakly beautiful coast of Northumberland makes a welcome return as a character in its own right.