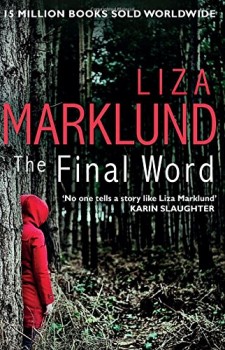 Crime reporter Annika Bengtzon is revisiting an old story of a young woman Josefin murdered by her violent boyfriend, a case that deeply touched her own life. She also reports on the court case of the savage killing of a homeless man. But the mysterious disappearance of her sister leaves her distraught.

Annika Bengtzon has been working as a crime reporter for the tabloid Evening Post for 15 turbulent years, telling stories that need to be heard, even though they are brutal and uncomfortable. Those who know the reporter say: ‘I know you have personal experience and knowledge of issues like this’ and ‘every experience teaches you something’, so there is no surprise that she identifies with and gives voice to those who cannot speak for themselves.

At the beginning of her career Annika investigated a horrendous murder of a young woman Josefin whose body was found in an old Jewish cemetery. It was not a sexually motivated killing, and Josefin was strangled by her rich boyfriend who had not been brought to justice for this, though he had spent time in prison for money-related crimes. Six witnesses gave him alibi and as new evidence comes to light Annika revisits the case.

She is also reporting on a complex court case attracting a lot of attention, of Ivar Berglund, accused of a vicious murder of a homeless man, and indirectly linked to other murders. Nina Hoffman, police officer and criminologist, wants him convicted, and keeps analysing all links and traces of DNA samples across labs in Europe.

At the same time the Board decides to close the printed edition of the newspaper and the crisis, tension and uncertainty affect everyone, especially Annika as suddenly she is caught in own family drama. Her sister Birgitta, with whom she’s got nothing in common, and not much contact, seems to have disappeared. Annika’s mother blames her for not using her political contacts to search and Annika herself feels that Birgitta’s husband might have been involved in that disappearance. The complicated personal past rears its ugly head: Annika caused the death of her then boyfriend who had been abusing her for years and only her detailed diary reassured the court that it was self-defence.

If you haven't met this modern ambitious and compassionate woman before then starting at the last book isn't necessarily a bad idea. The background clarifications as to her story aren't too detailed so it would be easy to catch up with things that had happened before. Additionally, the narration just scratches the surface of her eventful life, just making you want to find out more. Exposed (the first novel in the series) tells Josefin’s story, and provides the painfully sad context to the journalist’s life which then is developed in the next ten books (The Final Word is 11th).

The Final Word, translated sensitively by Neil Smith, proves again that Liza Marklund is one of the most popular Scandinavian crime writers who has achieved the feat of being a top bestseller in all five Nordic countries, as well as the USA. In this violent psychological thriller, with interwoven political elements, Marklund’s writing style effortlessly carries tension and suspense, while bringing the multi-layered psychological portrait of a character who makes mistakes but perseveres to keep her integrity and her moral core intact. She is trying to combine work at the chaotic tabloid and hectic life of a mother and a wife, feeling often like a failure for hurting those close to her, and not being good enough for her family. This is a brilliant book and hopefully not the final word as Annika Bengtzon’s ex-husband Thomas leads hateful online crusades and is a believer in the proverb: if you wait by the river long enough, the bodies of your enemies will float past …