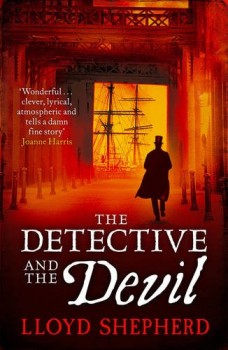 The Detective and the Devil

Constable Charles Horton of the River Police investigates the brutal killing of a clerk and his family in London’s East End and is drawn into the secretive world of the East India Company and a confrontation on a lonely South Atlantic island with a killer who seems to be the very Devil.

Lloyd Shepherd’s successful series blending horror, the supernatural and historical ‘faction’ – some of the characters, if not their actions, are real – has apparently reached its end.

River Police Constable Charles Horton, ex-Naval officer and mutineer, finds himself with enough gold in his pockets to buy a ship, his wife by his side, and on the other side of the world from his earlier dark and often disturbing wallows in the gutters of Georgian London. Much of the book, as with its three predecessors, is a biting condemnation of the glaring inequalities of early 19th century society.

Shepherd has shown his Guardian and BBC credentials, tackling the treatment of women, mental illness and the stark contrast between the wealth, depravity and corruption of those who hold power in the glittering drawing rooms of London with the misery, prostitution and abject poverty of much of the city’s population.

This time Horton confronts slavery and the curse of the multi-nationals in the shape of the piratical East India Company, which made fortunes for some and dictated the course of governments at the expense of millions of the poor.

Horton is summoned to the brutal murder of a Company clerk and his family in London’s East End. More killings follow and he begins to see a link to ‘John Company’ and its inexplicable ownership of the lonely South Atlantic island of St Helena. Under the auspices of the Royal Society, Horton and Abigail are sent there – and into a deadly struggle between good and evil, danger and beauty.

Key to this ingenious mix of historical fact and lively invention are the myths and legends surrounding Elizabethan mathematician, philosopher, alchemist, occultist and visionary John Dee, woven through the plot to provide both an introduction to the supernatural angle – and some of its darker moments.

It is Dee, in a way, who, through her pursuit of natural philosophy, aids the recovery of Abigail, still struggling to overcome her ordeal in an inadequate asylum to become a brave and intelligent partner for Horton and a formidable and modern woman in her own right.
Shepherd’s scenes, particularly those in class-ridden London, have real atmosphere and richness, and his clever use of period language not only adds historical authenticity, but also engages the reader’s intelligence in this rich and savage story.

This dark and atmospheric narrative opens slowly, then accelerates to a powerful and shocking conclusion. As the setting changes beyond recognition, there is an earthiness and timelessness to his descriptions of St Helena that is almost intoxicating.

The story is well crafted and beautifully written, drawing the readers into a sinister, complex and magical tale. Read it as a standalone, but if you want the full impact of this fine series, the other three books are very nearly as good and set up what appears to be this grand finale.

If the Hortons do choose sail off into the sunset, I, for one, will be sorry to see them go.