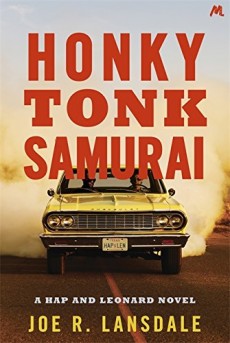 When an old lady catches Hap and Leonard on camera assaulting a dog abuser, they feel a little pressure to accede to her request that they investigate the disappearance of her granddaughter.

Hap, a self-proclaimed white trash rebel, and Leonard, a black Vietnam vet, constitute an East Texas crime-fighting team. Following the appointment of their old boss Marvin as the local chief of police, the pair are nominally working for Brett, Hap’s girlfriend, who provides minimal PI back office services.

The book starts with the team relieving a dog owner of his pet, with extreme prejudice, when they see him kicking the animal. Ms Buckner, who has the episode on video, persuades them to look for her granddaughter Sandy, who vanished some years ago with $50,000 belonging to her.

Sandy was last known to be working at a saleroom offering expensive vintage automobiles. Hap and Leonard check the place out, and suspect that other services are also available to the well-heeled. With the assistance of a few friends and acquaintances they take steps to disrupt the web of crime and murder hidden behind the front, during which they uncover what really happened to Sandy.

What characterises this book, and Lansdale’s style, more than anything else is the repartee bouncing around between the various players. There is plenty of dialogue, and it is full of slang, colloquialisms and down-home truths that many may find amusing.  Everybody is at it, the main protagonists, Marvin, Jim Bob, and Booger – salty dudes all, brought in to help with the job – and even Ms Buckner.

Unfortunately this exchange of witticisms is not terribly amusing, and it is often vulgar in the extreme. There’s a limit to the number of times you are going to find someone exaggerating the size of his ‘pecker’ entertaining, and Lansdale exceeds this by a margin. Smart dialogue is certainly an art, and writers who hit the spot are rare. John Sandford is good, and I like Robert B Parker’s Spencer, although even there some of the exchanges between Spencer and Hawk border cheesy. Lansdale falls somewhat short.

There is also a rather odd disconnect between the rough tough image of Hap and his behaviour: protective of animals, worried about not giving killer psychopaths a fair break, refusal to cheat on his girlfriend under great provocation, and willingness to sit with an old woman on her deathbed. Leonard is gay, and Hap maintains a wholly PC attitude to his orientation, while sustaining a rather prissy battle with him over vanilla cookies and Dr Peppers. Next minute, Hap is out the door festooned with weaponry to blow the opposition into small pieces.

Lansdale has a long list of prior publications to his credit, including eight previous Hap and Leonards, and a TV series is said to be appearing shortly, so his distinctive brand of ‘buddy’ action must have fans. It’s undemanding fare, however, so be warned.