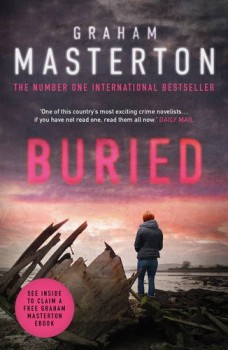 Some advice for the lovely lesbian undercover Garda Detective Sergeant Kyna Ni Nuallan. Get yourself transferred out of Cork and as far away from Detective Superintendent Katie Maguire as you possibly can! You may love her, but so far she’s managed to have you beaten up, kidnapped, raped and shot. If the series goes on, you’ll never survive the next of Masterton’s over-the-top, but absolutely gripping, stories of organised Irish crime and sectarian violence.

Masterton, an ex-editor of Penthouse, made his name as a horror writer, winning a series of international awards. And there’s plenty of chillingly depicted horror in this convoluted tale of organised crime, sectarian violence and police corruption set mainly in the city of Cork, where he lived for five years and which was the spark for the six books of the Maguire series.

The discovery of the mummified bodies of a father, mother, their two children and family pets beneath the floorboards of a cottage in Blarney points to an execution during the Troubles of the 1920s.

In this part of Ireland, the past never stays buried. As Maguire and her team investigate the coldest of cases, old sectarian rivalries flare once more. At the same time, she must confront a brutal criminal, using the cover of terrorism, and suspected of at least organising the murder of one of her detectives. So far the physically repellent and unlovely tobacco baron Bobby Quilty – cigarettes in Ireland are the most expensive in Europe and smuggling a multi-million euro business – has managed to avoid prosecution through a combination of brutality, threats and staying one step ahead of the law.

As the Garda close in, Quilty arranges the kidnapping of Katie’s former lover and she comes to realise he is being tipped off by a mole within her own station. She persuades Ni Nuallan, not yet fully recovered from her wounds, to go under cover once more, but when she too is held by Quilty, Katie must go outside the law to save them both.

A piece of luck exposes the police mole and this hurricane-pace story builds towards an improbably explosive, but thrilling, climax. However, there are more than a few inconsistencies compared with the earlier books and characters who were developing sympathetically seem to have changed. Maguire is now a driven vigilante. She no longer thinks things through or realises actions have consequences .She is also quite callous towards her brain-damaged sister and has little empathy with her other sibling who acts as carer.

Her once well-rounded, even sympathetic, personality is beginning to slip into self-absorbed obsession and her exploitation of Ni Nuallan’s feelings is quite unpleasantly cynical.Her former lover’s mother died in the first book, but now has come back to life suffering from Alzheimer’s! And how come exposed corruption within the Garda seems to go unpunished?

One thing Masterton does not exaggerate is the threat from terrorism and organised crime. Since the establishment of the Garda Síochána in 1922 at least 23 officers have been murdered by individuals or groups associated with paramilitary and terrorist organisations, the most common cause of death bar accident. The most recent was in October 2015.

Despite its failings, this is another original and pacey thriller from a master storyteller. With plenty of unpredictable twists and turns, great pace, a superb ear for Irish street argot and some fine descriptive scene setting, it once again delivers on every level of excitement and intrigue.