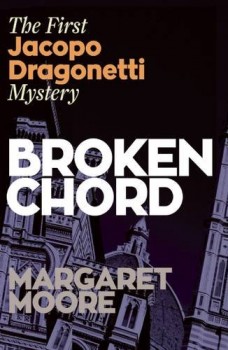 A brutal murder occurs in a family villa in Italy. With everyone under suspicion the murky side of each character gradually unfolds. Will Inspector Dragonetti be able to cut through all this to find the culprit?

Ursula is a wealthy widow who has had a run of unsuitable husbands and men friends, resulting in a household with three children with three different fathers. Each child thinks themselves to have been damaged by their past and each has a recent history of psychological difficulties. When Ursula announces her intended marriage to her latest toy boy, Guido, everyone is against it. Even Ursula’s loyal retainers, Marta and Piero, are upset. Guido has threatened to make changes to the way in which the household is run, despite it currently being managed smoothly by Piero. When a murder occurs in the Tuscan villa in which they all live the family descend into a morass of mutual suspicion and fear.

This is not a pretty read. The family in the story is a very dysfunctional set of unpleasant characters. Each character is built up slowly in the early chapters so that it is evident that each has a motive for murder. Consequently when a murder happens with no obvious evidence as to who has committed it, Inspector Dragonetti, the local inspector, has his work cut out trying to establish what happened.

Dragonetti too is not the most likeable of characters, lately having emerged from a divorce and with a chain-smoking habit which irritates his colleagues. There is little light relief and no humour in this novel, although on the positive side, a running contrast is made between the damaged young people of one generation of the family and the younger innocent children of the next generation who provide some hope in an otherwise dark novel. Similarly Inspector Dragonetti’s gloom is contrasted with the lightness of his new partner’s life and of his new kitten.

The story is based in a modernised Tuscan villa with swimming pool. There are also some interesting brief descriptions of other Italian villas, often crumbling, and sometimes partially closed up, alluding to the past history of the area. There are too some very brief snapshots of parts of the city of Lucca. More perhaps might have been made of the opportunities to showcase Tuscany.

The writing is fluent, and the plot and the arguments all follow logically, reflecting the careful construction of the novel. The threads established at the start all provide a sound basis for the subsequent action to develop. As with many psychological thrillers this novel, once started, appears to have an inevitability about its length. The logical arguments have to run their course with each thread of the story having to be worked through until that avenue has been satisfactorily explained. Sometimes an element of surprise might have been welcome. However the construction means that the identity of the killer really is kept secret until the end so in that sense it is a genuine mystery.