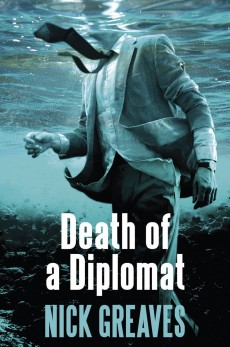 Death of a Diplomat

Death of a Diplomat slips, not entirely comfortably, into the whodunit genre because the question is not so much, “Who did it?” as, “Did anyone do anything at all?” Was the drowning of a retired diplomat a result of suicide - as the prologue would have us believe – or an accident or murder? That question isn’t solved until the very end of the novel when an unanticipated development is presented.

There is a kind of relaxed self-assurance about Nick Greaves’s writing that is very attractive. He has a tale to tell and a relatively short space in which to tell it but he doesn’t feel the need to hurry into his story. He allows us to settle into the atmosphere of the Bahamas and carefully develops the character of Michael Burton, the Foreign Office official, whose background and behaviour are not entirely what we might expect from a civil servant.

Similarly, he takes his time over creating the other two leading characters in the story – Chester King, the police detective, and Melissa, the dead man’s widow, neither of whom do we feel we can completely trust. However, once the action begins, it doesn’t let up and the plot goes rapidly forward. Apparently one of the author’s favourite activities is scuba diving – something he is able to introduce seamlessly into the novel. He also appears to know a lot about sports cars because there is an exciting sequence in which Burton has to demonstrate his considerable driving ability.

A particular skill Greaves shows is attention to apparently insignificant detail, which can bring a scene and the characters in it to life. For example, the maître d’ of the expensive restaurant indicates from his treatment of them that he knows the difference between the wife of Sir John Little and an unimportant Englishman like Burton. Similarly, we have all met the bossy matriarch on the breakfast terrace who is determined to get a table ahead of anybody else. When a waitress leans over Burton’s table and betrays a generous amount of bosom we are told that “he suddenly felt a flush of desire for her”, clearly accentuated as she walks away, her wide hips swinging from side to side. Here is something any man can immediately understand.

However, no matter how good the detail and the characterisation, this kind of novel depends for its success on the way in which the ending answers the questions posed by the plot. Whilst it has to be said that it is not entirely convincing, that is not to say that it could not have happened as the author suggests and he certainly keeps the reader guessing right up to the very end.

It must be an anxious time for someone awaiting public reaction to his first novel but Nick Greaves has made an impressive debut with a novel that appears to have gained little recognition, which is a shame. It is well worth taking the trouble to seek out.