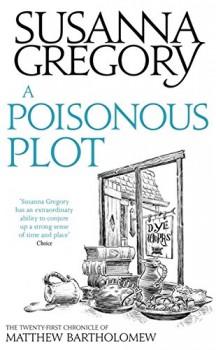 Twenty one stories into the Matthew Bartholomew and Brother Michael chronicles and the mystery historical thriller factory that is Susanna Gregory is still using the same basic ingredients – and getting the same brilliant results!

The year is 1358. More than a century after its foundation, the university of Cambridge still faces the hostility of the town’s inhabitants, many of whom would like to see it moved out into the Fens.

This simmering tension is stoked by the rivalries between the endowed colleges and the commercially funded hostels; the disputes between the various religious teaching orders; and the overweening arrogance of the academic community in their midst. Not that the townspeople are innocent of their share in building bad feeling. The usual mixture of greedy, gullible and ghastly all contribute degrees of resentment to stoke a fire which threatens to destroy both university and town.

Gregory keeps up her body count. The title of the book gives the primary means of death, but there’s the odd stabbing or strangling just to confuse. The real question is why – and how – the poison only seems to affect the rich?

As the feast of All Hallows approaches, town and gown blame each other, but partly unite to blame the new dye works opened by Bartholomew’s widowed sister Edith, which is offering a legitimate means of putting food on the table for the town’s ‘Frail Sisters’. Even physician and corpse examiner Matthew is concerned that effluent from the works, discharged into the River Cam, could be somehow linked to a series of almost inexplicable deaths.

The plot is well crafted and far from obvious – a return to the more muscular earlier chronicles. As always, Gregory’s history, much of it based on real characters from the period, is superb and few authors give such a vibrant sensed of place and time.

Many regular characters, all with their own foibles, feature again. New arrivals such as the pompous, ignorant and overbearing medicus and drawer of expensive horoscopes, Nigellus de Thornton, and the weaselly lawyer Stephen, always keen to exploit any situation for his own gain, offer easy targets as poor, but somehow horribly modem, representatives of their professions.

There’s a nice comic touch in places, and a sometimes quite dark mystery, which reflects the fears and superstitions of the age, has enough twists to keep you guessing. A Poisonous Plot is yet another mystery for Matt and his manipulative Senior Proctor friend that is convoluted and confounding, remarkably intellectual, meticulously constructed – and a darn good read!