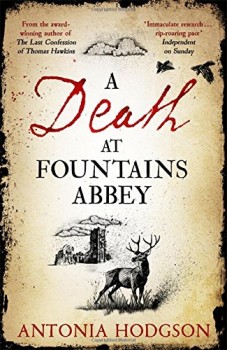 A Death at Fountains Abbey

John Aislabie, one of the wealthiest and most hated men in England, has been threatened with murder. Thomas Hawkins is blackmailed into investigating and must hunt those responsible, or lose the woman he loves.

Former Chancellor John Aislabie is probably the most hated man in England. Aislabie used his position at the Exchequer to promote the biggest con in British history – the South Sea Bubble – which totally ruined thousands with its collapse, but made enormous fortunes for those on the inside.

After a brief imprisonment in the Tower of London, Aislabie has retired to his palatial estate at Studley Hall in Yorkshire, close to the ruins of the once formidable abbey which gives the book its name. He owes his freedom to a meticulously kept ledger of South Sea shares, naming many of the great and good of early 18th century England as beneficiaries from the scheme – including members of the not universally popular Hanoverian royal family.

The clever and manipulative Queen Caroline of Ansbach, wife of George II knows that if their involvement is revealed it would lead to huge civil unrest, the possibility of their being deposed and a French-backed, Stuart-led invasion. She summons Norfolk parson’s son, gambler and rakehell Thomas ‘Half-Hanged’ Hawkins, who has survived – just – their earlier meeting and settled to life as pornographer to the wealthy and aristocratic and lover of the beautiful Kitty Sparkes who has twice his brains, business sense, temper – and some formidable criminal connections.

The royal request is simple. Aislabie has appealed for the Queen to use her influence to get him reinstated. He still has the ledger, now a tool for blackmail. His life is also under threat, apparently from victims of the South Sea crash. Under cover of investigating these threats, the Queen demands Tom recover the damning book. Refusal is out of the question. Caroline possesses information which could see Kitty hanged!

Once in Yorkshire Tom, Kitty and their ward, Sam Fleet, the son of an East End gang boss, find Aislabie obsessed with a young woman claiming to be the daughter he lost to a house fire in London more than 20 years before and are plunged into a maelstrom of violence, plotting, deceit and murder which builds towards the darkest night of their lives in the ruins of Fountains Abbey.

The third in Hodgson’s series – her debut The Devil In The Marshalsea won the Crime Writers Historical Dagger – is every bit as well written and historically accurate as its sequel, The Last Confession of Thomas Hawkins. Always just on the right side of convincing and with an often quite chilling view of the seamy side of the early 18th century, it is inspired by real characters, events and settings.

Her research is impressive. I’ve been a racing man all my life of and reckon to know the sport’s history, but it took Hawkins’ third adventure to bring home the fact that the first race for women was sponsored by Aislabie’s wife at Ripon in 1723, when the local ladies abandoned their petticoats and crinolines for the racey breeches which revealed their legs to salacious onlookers!

Written in the first person narrative, these three stories are all pacey thrillers from a largely neglected Georgian era, with sharp authentic dialogue, some nice touches of humour and a tremendous 18th century atmosphere. This could be read as a standalone in that Hodgson provides enough background information to enable the reader to get a feel for the pre-story relationships. But it would be far better to read the first two books to get the complete story.

Hodgson’s firm grip of characterisation and plot produces an occasionally outrageous, mischievous, entertaining and immensely enjoyable adventure story from its dramatic prologue to its chilling finale.