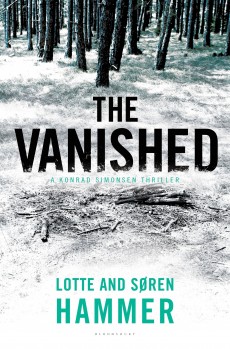 by Lotte and Søren Hammer (translated by Martin Aitken)

When Detective Konrad Simonsen returns to work after a heart attack, he’s called as an observer to a violent school shooting, and assigned to deal with a minor case of a dead postman. He soon finds a tenuous link between these two and decides to follow it.

After a severe heart attack, Detective Chief Superintendent Konrad Simonsen returns to the Homicide Division in Copenhagen. It’s August 2008. On his first day he is at the scene of a violent shooting at school where an unhappy overweight student killed his teacher, and then more deaths followed. Arne Pedersen, the temporary Chief Inspector, tries to pull together different threads, as it appears that the victims had some sort of connection to another deceased: Jørgen Kramer Nielsen.

So, to ease him back into his duties Konrad is allocated a low priority case concerning that postman Jørgen Kramer Nielsen whose fall down the stairs seems to have been an accident. But as Simonsen digs deeper he finds new forensic evidence pointing towards murder, and through detailed search into Nielsen’s totally uneventful life, he also discovers his attic: plastered with life-size photographs of the missing 17-year-old Lucy Davison from Liverpool who disappeared in 1969 after her visit to Denmark.

As the case unravels it becomes clear that Lucy was with Nielsen and five other high-school students, members of the informal Lonely Hearts Club, at the time of her death. Something horrendous happened at the scouts’ cabin in the forest where ‘Hearts’ came to revise for their maths exam, and the event had left profound scars in all teenagers. The postman’s conversion to Catholicism causes additional problems for the investigation as Nielsen’s priest, bound by confidentiality, implies that he knows a lot more about the young girl's disappearance than he could possibly say. Yet Konrad finds himself drawn to the priest as if in search of some moral wisdom.

The story’s second strand relates to Konrad Simonsen’s past. His massive health scare and the newly-discovered case of missing Lucy trigger his memories. He feels he has to look back on his own youth and relationship with his first real love, the left-wing flower child Rita. In 1970s Copenhagen Simonsen was always being deployed to demonstrations to provide ‘crowd control’ and never understood hippie movement, sexual freedom and social activism.

While he reassesses his past and investigates the secrets of the six Danish students, now damaged adults, his course of action has a huge impact on the close-knit homicide team, including a difficult relationship with brilliant Pauline Berg who was kidnapped and tortured a year before and struggles with the paralysing flashbacks; and with the Countess (no blue blood here), one of his closest colleagues and now a partner. Eventually the efficient team, with Arne Pedersen at its official helm, begins to question Simonsen’s methods.

The Vanished is the third book by the brother and sister duo, translated into English by Martin Aitken, after The Hanging and The Girl in the Ice. At times it feels that it might be too long but that’s just an impression. The crime writing siblings, Lotte and Søren Hammer, squeeze every drop out of the policemen and readers’ patience to deliver an excellent finale. In true Nordic Noir fashion, the novel brings disturbing themes, deft characterisation and social conscience.