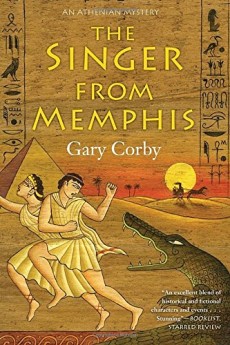 The Singer From Memphis

Athenian investigator Nicolaos and priestess wife, Diotima, are hired by would-be historian Herodotus to guard him on a research trip to war-torn Egypt.

To give Gary Corby’s sixth Athenian adventure the full Hollywood build-up its deserves: think Mick Dundee meets the Pharaohs in a rip-roaring, pre-historic mix of fact, action and humour that puts Indiana Jones firmly in the corner with the rest of the old dodderers. And it’s got crocodile wrestling too!

It’s set in 456BC, where no one has yet got around to writing down the important things which happen for the benefit of future generations. Slightly dodgy Greco/Persian would-be author Herodotus is about to change all that. Through the auspices of definitely dodgy Athenian politician Pericles he hires Athens’ only private investigator, Nicolaos, to accompany him to Egypt to research that ancient country’s history.

Nico, accompanied by his pneumatic priestess wife, Diotima, is about to discover that helping an author with research can be very dangerous. Egypt is in the throes of a rebellion against its Persian overlords. Three different armies roam the countryside. Pirates infest the sea route and the Nile is full of crocodiles. Everywhere Nico goes, there’s a civil servant trying to bribe him, a secret agent trying to kill him and, worst of all, he can’t get a decent cup of wine, as what should have been a simple historical investigation turns into a nightmare of international espionage.

Much of the story revolves around a quest for Pharaonic artefacts which will confer legitimacy on whoever possesses them and end the three-way war for control of the agricultural powerhouse of Egypt. Part of what makes it so enjoyable is immediate involvement with the main protagonist Nico, who has had several previous outings in this murky world, although he’s only 25. He has also had dealings, usually bad, with some of the other characters.

There’s much skulduggery and shifting alliances as we move through Greece to the Mediterranean islands, a brush with pirates, Egypt and then Libya. And there’s also a fascinating subplot about a super weapon – invented in China – which could revolutionise the killing power of armies.

Nico and Diotima must survive Persians, Spartans, cats, camels, crocodiles, powerful but corrupt members of the world’s oldest civil service, priests, beggars, embalmers and assassins to fulfil their duty to Herodotus, and also complete a secret task set by Pericles.

This finely-crafted story, with its great attention to historical detail, is pacey, light and endlessly entertaining. The only caveat is that for obvious diplomatic reasons, Herodotus had to leave the events it describes out of his best-selling Histories! Written with that wry Australian humour which made Dundee such a worldwide success, even Corby’s introduction to his characters, including short quotes from each which should give you an insight into what’s to come, is delivered with panache. He sets the tone when suggesting how to pronounce some pretty confusing ancient names: “I hope you’ll say each name however sounds happiest to you, and have fun reading the story.”

That instruction, together with a timeline for those of us not as steeped as he is in ancient history and culture, make this the perfect summer read. It’s ideal for lovers of Lindsey Davis’ brilliant Roman detective Falco, the same blend of fact, action and downbeat humour, but with a distinct Aussie twist which sets the engaging Nico apart from the rest.