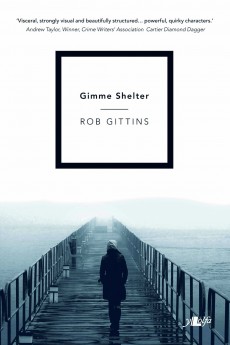 Screenwriter Rob Gittins makes an impressive, hard-hitting debut with Gimme Shelter. The book hits the ground running at a pace that almost never slackens as witness protection officer Ros Gilet does her best to keep her clients safe from whoever is after them, whilst doing her best to control her own demons, the faces of those she’s been unable to save.

Dealing with the streetwise, hard-bitten Tyra Rea, with her dyed blue hair and sharp tongue, is no easy task. Tyra doesn’t like the confinement of the witness protection scheme, but it’s Ros’s job to keep her out of the hands of underworld boss, Yaroslav, a man who thinks absolutely nothing of dripping acid into the eyes of someone who has crossed him. Tyra is prepared to testify against the Ukrainian and that makes her very important indeed.

In Gittins's world, absolutely nothing can be taken at face value. There’s no black and white, except possibly in the character of Yaroslav, who has absolutely no redeeming features at all. At times, the police officers are almost as bad as the criminals they’re trying to bring to justice. One of them, murder squad detective Kayne Masters, is a man who thinks absolutely nothing of dousing potential sources of information in petrol and then setting light to them as a means of loosening reluctant tongues. Masters makes John Thaw and Dennis Waterman in the hey-day of The Sweeney look like a pair of bleeding heart liberals by comparison.

This is a strong debut, well-plotted and superbly written with a sharply-realised cast that I’d very much like to see more of, even though I did have to read the book from behind the sofa, peering through my fingers and hoping that someone would keep me safe from the bogeymen populating its pages. Its only flaw, for me, is that I got little or no sense of place from it. The action moves between Wales and London, but it is hard to distinguish the different locations, possibly because Gittins is more used to writing for the visual medium of television, but the plot itself is well-crafted enough to more than make up for that slight deficiency.

Ros’s past is skilfully revealed as the story progress, as is the story of some of those she’s been unable to protect. None of this makes easy or pleasant reading, but their stories are always compelling.

Gimme Shelter is almost too brutal to stomach at times, with graphic descriptions of torture and murder leaping all too vividly off the page with frightening regularity, yet its descent into a particularly horrific abyss is tempered at all times by the quality of Gittins's writing. This is not a book for the faint-hearted, but if you can stomach the almost casual brutality, it’s very much worth weathering the stomach-churning detail for a police thriller that grabs an unusual angle and runs with it, maintaining pace and tension throughout.