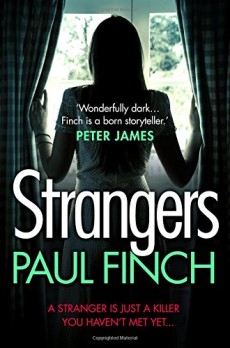 A woman, is murdering men in public pick-up spots. PC Lucy Clayburn forms part of the undercover team seeking to find the killer. As a result she unpacks much more about her life than she expected.

Lucy Clayburn is a young PC who wanted to move into work as a detective but an unfortunate incident loses her this opportunity. As a result she is keen to prove herself four years later, as part of a large operation of undercover workers who are seeking to find a serial killer, a woman who not only kills but also then emasculates the corpses.

Lucy is a dedicated police officer, devoted to her work, with a strong sense of right and wrong. As a result of her involvement in the investigation she becomes attached to a young prostitute and then puts herself under extreme danger by having herself located in a high class brothel run by two very unsavoury sisters. Lucy is brave and certainly not risk averse, and her actions lead not only to the identification of the killer but also the overturning of some serious organised crime. Along the way she discovers more about her own history and family background than she knew, expected or wanted.

Paul Finch has created a very plausible character in Lucy Clayburn. It is very easy to identify with her, whatever the circumstance in which she finds herself. The other characters are also well conceived and described, and are all only too believable. An underworld of organised crime, protection racketeering and money laundering is painted clearly and believably. The sordid world of prostitutes working in dark lay-bys and other dodgy areas is shocking in its atmosphere of fragile insecurity. The limited power of authority is also concerning and it is with relief that Lucy manages to successfully resolve the crimes.

The book is pacey and well written, and ends with a clever and interesting twist which sets the scene, hopefully, for further investigations involving Lucy.