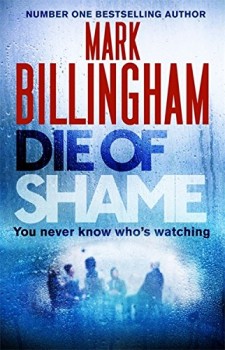 When a member of a therapy group is murdered, DI Nicola Tanner finds the resulting wall of silence hard to penetrate.

When a woman is found dead in her flat, DI Nicola Tanner’s investigation into her murder is hampered by the fact that the most likely bunch of suspects are a close-knit group undergoing therapy for various types of addition.

The group is run by Tony De Silva, a man with his own problems, and he makes it clear from the outset that what happens in the group stays in the group.  The others close ranks as well, leaving Tanner struggling to find some way of getting to the truth about who wanted the victim dead.

The group is a mixed bag. There’s Diana, who hit the bottle when her husband left her for another woman; Chris, a sharp-tongued, frequently disruptive drug-addict; Robin a surgeon who nearly killed a patient when he operated under the influence of the sort of drugs all too easily available to someone in his position; attention-seeking Heather, who desperately wants some kind of relationship with Tony, despite the fact that he’s married with a teenage daughter; and Caroline, the newest member of the group who’s joined in the hope of finding a way to lose her addiction to over-eating.

As their therapist, Tony De Silva is meant to keep a professional distance from the group, but it’s sometimes a case of do as I say, not as I do. On the whole, they are a hard group to like, and I’m sure that isn’t the point of the book. What they do provide is a varied bunch of suspects and, whilst I didn’t always find the set-up convincing – it’s never made clear how some members are paying their way or how they got referred to Tony in the first place – they do provide plenty of interest. This is definitely train wreck TV.

Events play out across converging timelines, fortunately signposted in chapter headings which make it clear whether the action is taking place in the past or present. Without that, I’m sure I would have been terminally confused very quickly. Amidst a generally strong set of characters, the main weakness for me lay on the police side of things, with DI Nicola Tanner coming over as rather lacklustre. Having put the book down, I find it hard to remember very much about her.

Die of Shame is a new departure for Mark Billingham. The book has multiple view points, and alternates tense throughout, with the sections in past told in the present tense and vice versa, a stylistic choice that always makes me scratch my head and wonder why. It’s hard to say more without giving the game away, and for me the jury is still out on whether the book worked or not. It mainly came alive with the characters who stray into its pages from elsewhere and the cameo appearance of DI Tom Thorne was the saving grace for what might otherwise have been an unsatisfactory ending.