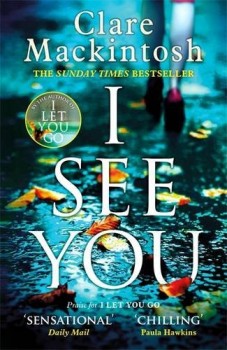 Zoe Walker is on the tube home, glancing through a newspaper, when she sees her own face staring out at her from the classified ads. She must find out whether it’s a joke or whether she’s in danger.

Another week, another dose of domestic noir (repeat after me: paranoid female lead, dodgy hubby and brattish offspring). Clare Mackintosh’s I See You seemingly has the first and the last, but boasts a good-egg ex-husband and an even better egg partner. But that’s where the stereotypes end.

Zoe Walker is on the tube home after a tiring day dealing with her obnoxious boss. She’s glancing through a newspaper when she’s brought up short by her own picture staring out of the classified ads at her. She takes the paper home, but her family are adamant that it’s simply someone who looks like her. The next day, there’s another woman – and another, the day after that. Zoe starts to dig around, and finds that the phone number in the ad isn’t in use, and the website address takes her to a largely blank page.

She finds an ally, though, in British Transport Police officer Kelly Swift. Kelly is in the doghouse for past misdemeanours, and she has personal baggage aplenty, and has to sweet-talk a former boss into letting her get involved. But she’s as tenacious as Zoe when it comes to tracking down whoever has their sights on these women.

I See You benefits hugely from an ordinary woman being under threat – there are no holiday homes in Devon here, or sugar daddies. Instead, Mackintosh shows us a 40-something woman who can’t afford to lose her job, no matter how much of a pain her boss is, and who has two relatively normal children.

Don’t be fooled into thinking this is a deceptively simply tale – Mackintosh tells a good story and has the requisite twists and turns up her sleeve. I’m still not sure what I thought of the ending which doesn’t quite stand up to the quality of the rest of the book (think moustache-twirling villains). But it’s a heck of a good race to get there …