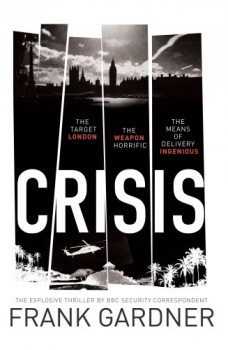 Sent to Colombia to investigate the murder of a British intelligence officer, Spanish-speaking former SBS man Luke Carlton is caught in a revenge plot with international dimensions – and London as its target.

Frank Gardner is a broadcasting rarity. A voice of genuine authority and gravitas in the mishmash of bright young things, second-rate PC hacks and outright pseuds that is the BBC newsroom, his clear, informed reporting or opinion pieces on security stand out.

The urbane ex-Marlborough College student, Green Jackets officer and Saudi banker who speaks street Arabic as well as classical, survived an assassination attempt by Al-Qaeda gunmen, which killed his cameraman, in Saudi Arabia in 2004.

Despite losing the use of his legs to 11 bullet wounds, he was back on screen less than a year later, his reporting, particularly on the so-called War on Terror, from his wheelchair as sharp and insightful as ever. He knows his subject inside out – it is said those who ordered the attack thought he knew it far too well to be just a journalist – so when he decides to launch another career as a writer of espionage thrillers, it’s worth taking note.

His hero is Luke Carlton, an ex-Special Boat Service Commando, now under short-term contract, as are a select handful of former SAS and SBS men, to MI6 for missions where intelligence gathering is not alone enough and may need muscle and combat skills to back it up.

Sent to Colombia, where special forces have aided the government fight against the drugs cartels for years, to investigate the murder of a British intelligence officer, Spanish-speaking Luke finds himself caught in a plot with international dimensions.

Paranoid drugs baron Nelson Garcia, ‘El Pobrecito’, plans a deadly revenge for the British-led interference in his billion pound business. With money no object and the aid of that most sinister and secretive of rogue states, North Korea, he concocts and implements an ingenious plot with the population of London as its target.

Throw in some interesting background on the politics, both inside and out, of the security services, bags of realistic action and a mandatory quota of pretty girls and you have the ideal espionage novel.

Special forces stories have largely replaced Bond-type heroes at the top of the action/espionage genre thanks to authors like Andy McNab and Chris Ryan. But Gardner is clearly determined to highlight the little publicised role of the Special Forces in protecting the country in increasingly troubled times. He has also fully taken on board the P7 mantra of the units – and the ‘teeth’ regiments which provide most of their manpower – Prior Planning and Preparation Prevents Piss-Poor Performance – and has produced an absolutely irresistible debut: smart, authentic, and always entertaining.

This is a thriller for the 21st century, with its insider knowledge and up-to-the-minute hardware. It is intelligent, polished and simply, but effectively, written – high-voltage story-telling at its best and worthy of Frederick Forsyth or John Le Carre.