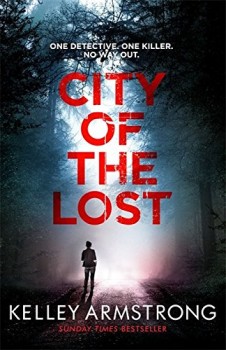 City of the Lost

Detective Casey Duncan has a dark secret and when her abused best friend also finds herself in serious risk the two of them decide to disappear to a town where people go to vanish. The trouble is that the past does not leave you alone.

Detective Casey Duncan has a guilty secret which has the added disadvantage that if it is found out she will attract the attention of some very undesirable people. Her best friend, Diana, relies heavily on Casey to support her in her abusive relationship with a violent boyfriend. When the violence gets out of hand for Diana, Casey agrees to accompany her to live a remote town where people go to vanish from the world.

Clandestine meetings and planning result in the two friends arriving in the town which is deep in the woods. It seems that the town, Rockton, has need of a detective, although the Sheriff, Eric Dalton, is less than welcoming. Shortly after Casey arrives the first murder is committed. In a town where everyone is hiding their past, investigation is not easy. Also, this remote town functions on strict rules in order to sustain its isolated existence.

The idea behind this book, a town to which you may go in order to escape your past, is ingenious and appealing. The book starts well; Casey Duncan is an attractive protagonist, well described and believable. Her friend Diana is less believable and the relationship between them does not seem enough to support Casey’s willingness to leave her life behind.

Once the action moves to Rockton, the pace seems to slow down. The town is well described but at first the characters appear rather one-dimensional. Stick with the book, though, because very quickly the reader becomes engaged with all of the characters. The death toll grows and no one is safe. The plot develops at a satisfying pace and the book becomes increasingly hard to put down. You really want to know who is going to turn out to be the killer and, surprisingly, the resolution of the love interest of the book becomes equally interesting.

Kelley Armstrong has done a very good job of creating characters and an environment, ripe for further books. I look forward to reading them.