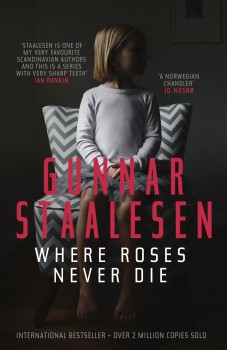 A violent robbery at an exclusive jewellery shop goes completely wrong. Bergen’s private investigator Varg Veum is asked to look through details of an old case of a missing child. Will he find a connection between these two crimes which happened nearly 25 years apart?

March 2012. The only way to save Varg Veum from spiralling descent into self-destruction is another case into which he can sink his sharp investigative teeth. Three years after his fiancée Karin’s death (following the events in the previous novel We Shall Inherit the Wind) his personal and professional life lies in tatters.

Thankfully ‘a 59-year-old private investigator, of the so-called hard-boiled variety’ gets his chance to rise from despair and depression to help a full of guilt grieving mother in search for answers as to what had happened to her three-year-old daughter Mette who vanished without a trace in September 1977. Maja Misvær approaches Veum as the expiry date for the statute of limitations draws nearer.

One moment little Mette was playing in a sandpit in a secure garden of five houses, a so-called co-op, an idea of an architect Terje Torbeinsvik who wanted to bring together a small community of parents and children living safely in a friendly yet liberal environment. The next – she was gone and lives were shattered. Five happy families were no longer so, divorces, suspicions, failures, promising futures never realised. But as Veum digs into new snippets of old and new information he slowly realises that something else must have affected the tiny and close-knit group of the tranquil suburb of Nordås.

The original investigation was thorough yet completely fruitless. Every avenue has been considered and explored. It included a short detention of Jesper Janevik, from the island of Askøy and a friend of one of the families, and accused of indecent exposure ages ago.

Veum analyses all possible evidence, and embarks on a painful journey of hidden memories and most personal experiences. He barges uninvited into concealed shameful secrets, and most of the time he leaves devastation in his wake. But his experience as a social worker in child services will not allow him to leave a stone unturned until he finds the truth, closure and understanding of actions. As always Varg Veum works on the edges of the policing world, but finds out that a robbery in a jeweller’s, three months earlier, resulting in a shooting of a passer-by might have some connection to the Mette Case.

To say that Gunnar Staalesen is the master of Nordic Noir is an understatement. He is one of the finest storytellers, his prose elegant and restrained yet raw, powerful and totally heart-wrenching. This complex stunning and emotionally-charged novel (in Don Bartlett’s perfect translation) ends with a touch of hope and optimism not just for Mette’s mother but also for Varg Veum: ‘The choice was mine. The rest of my life was mine. All I had to do was choose.’