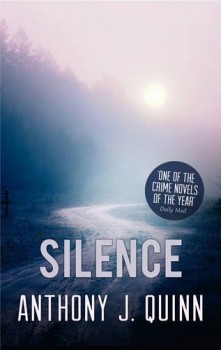 Inspector Celcius Daly investigates the car crash death of a priest and is dragged back into deadly history of the Troubles – and the death of his mother.

His investigation starts as a routine case – the death of a priest in what appears to be a road accident. But all too quickly Daly finds himself again peering into the brutal near-past of bomb and bullet, neighbour against neighbour. The truth, inasmuch as ‘truth’ applies to many things that happened in the deadly decade of the 1970s, is there somewhere. Daly, caught between the bland political correctness of the new Police Service of Northern Ireland and those dark days, is not even sure he wants to find it – particularly when it involves the death of his own mother, who he believes was killed in crossfire between police and the IRA.

Old atrocities dog the pages of all three books in the series, buried under a thin veneer of normality at every level of society. The petty jealousies, the collusion, the cover-ups are never more than a blink away in a country where the 1845-49 famine or Cromwell’s massacre at Drogheda 200 years before remain in the memories of many, unforgotten and unforgiven.

If you want the philosophy of the Troubles, and some of their reality, Daly will take you there. Quinn’s lyrically beautiful language invokes a nightmare scenario which threatens to overwhelm the near-paranoid detective who sees enemies round every corner of the new police headquarters. There is a sense of authenticity which makes it hard to believe that this is just a novel.

Plot surprises keep coming as Daly becomes enmeshed more deeply in the fog of uncertainty that surrounds so much of modern Ulster life. Burning with a deep sense of injustice at past excesses, he must always watch what he says, and to who. Those who then ran Northern Ireland, the politicians and the RUC bosses are still there, still living privileged lives, while the bombers, trigger-pullers, the torturers, spies and touts on either side of the sectarian divide seek solace in drink or oblivion through suicide, descend into madness or launch into new criminality.

Quinn captures this atmosphere perfectly. Even the popular Republican myth that somehow much of the madness was organised as a matter of policy by successive British governments and carried out by rogue elements of the RUC as well as Protestant paramilitaries becomes an integral part of this beautifully written story.

It is all given additional credence by his magnificent use of locale. The descriptions of the mists and mountains of Lough Neagh and Maghery provide an atmospheric and realistic background to what is a chilling, but brilliantly told tale.