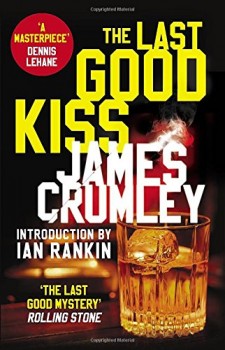 Montana private eye CW Sughrue is hired to track down a failing alcoholic author, but winds up searching for a girl missing for ten years whose trail leads him into a world of sex and crime.

Eight years after his death James Crumley is achieving the cult status he never managed in his lifetime. If you’ve not come across him before, think Chandler, think Spillane, shift them into the late 1970s world of post-hippie America, still deep in its dreadful Vietnam hangover. Chandler saw the American detective novel as ‘dark and full of blood’. Narrator CW Sughrue’s world is certainly that, although here it comes late in the story.

In the run-up, the guilt-ridden, drink-sodden Vietnam veteran, who’s hardly better than the criminals he investigates, explores almost every vice known to man. But for all that he retains a certain decency and sense of humanity to become a flawed knight on a quest.

Set against the wide roadside vistas of the western states, the story focuses on a handful of characters, their relationships, foibles, weaknesses, and how they seek to exploit each other.

At the end of a three-week hunt for a runaway and alcoholic bestselling author, Sughrue winds up in a ramshackle bar – whose main attraction is an equally alcoholic bulldog! The owner’s daughter vanished ten years before, but she wants Sughrue to find her. His search takes him to the dark side of San Francisco and a brutally frightening denouement.

This tough and suspenseful tale is set up by one of the best opening paragraphs in any hard-boiled thriller. With the Hemingwayesque wreck of the author, Abraham Trahearne in tow, Sughrue plunges into a series of sordid binges and road trips through the majestic Northwest, superbly described and atmospheric. If Trahearne is dysfunctional, the three women the author’s life, his wife, ex-wife and mother, are equally so. They either hire, entice, seduce, reject or otherwise confuse Sughrue’s quest to find himself as much as the missing girl.

The characters are well drawn, and in their own way, even the clear villains are engaging. Dialogue is snappy and authentic, with some good comedic exchanges and the prose taut. If the narration occasionally meanders, stay with it. The interweaving of the strands will become apparent and the story picks up pace as some subtle plotting builds towards an ending worthy of the best of Spillane.

Sughrue is very much a product of the hard-boiled US culture: an alcohol and drug-fuelled wise-ass, a country philosopher, a hopeless romantic unable to commit to any relationship – even with a drunken dog! But he’s a character worth getting to know. This is a book that will keep you thinking long after you have finished it.