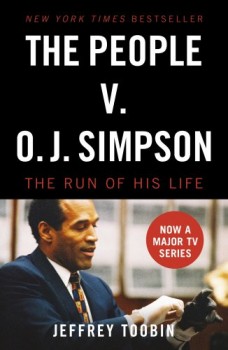 A detailed analysis of the infamous trial of a much-feted sports star for the murder of his ex-wife and a friend, a signal event in recent US history.

There must be few people in the West old enough to remember OJ Simpson’s 1994/5 trial who are unaware of at least some of this story. The BBC serialisation of Toobin’s book will no doubt have refreshed memories. The notoriety of the trial is, however, well-merited, and there are aspects of the whole affair which shine an excoriating light on US law and cultural manifestations.

For those who were living in a cave at the time, I should briefly explain that after a marriage breakup, OJ was accused of killing his ex-wife and Ron Goldman, a friend who by bad chance happened to be with Nicole when OJ came calling. There was a history of spousal abuse, forensic evidence of OJ’s culpability was overwhelming, and no tenable alternative theory was even advanced. Nonetheless, a jury in Los Angeles found OJ not guilty.

The reason for this apparently inexplicable verdict turns out to be race, or rather the poisonous history of race relations in Los Angeles. Despite OJ’s clear preference for white friends and a white lifestyle, his legal team were able to persuade the jury (of which only two out of 12 were white) that the prosecution was based on a police-inspired racial frame-up. Indeed, focus groups held to assist jury selection showed that few black jurors would have been prepared to vote for conviction whatever the evidence put up.

The defence played the ‘race’ card for all it was worth, and had in addition better resources which enabled them to exploit any small weaknesses in the prosecution case. The adversarial system in US courts, as in UK, does of course entitle an accused to the best defence he can afford. But when the celebrity of the accused enables an assembly of resources far in excess of those under command of the government, and the greatest cynicism employed in their deployment (none of the legal team ever for a moment believed OJ was innocent) any resemblance to justice in the outcome is hard to discern.

Celebrity was certainly a key theme of the trial. OJ’s escape of arrest in the white bronco, and key stages in the trial (televised live) generated record audiences. A fascinating aspect of the case was the way in which OJ’s stardom affected the police themselves: the kid gloves with which they handled the case ironically gave the defence grounds to claim normal procedures had not been followed.

Toobin is a good enough writer to keep the reader interested to the end of a pretty lengthy book, avoiding too much detail in favour of some of the wider aspects of the case. The cynicism of many of the participants is ultimately catching, however. It is difficult to believe that the appropriate lessons have been learned.