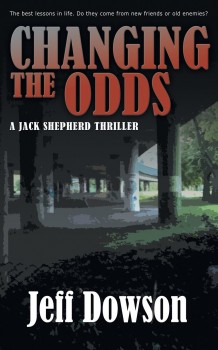 When Bristol private investigator Jack Shepherd is asked to look into the disappearance of an old friend, he soon ends up in hot water.

When private investigator Jack Shepherd turns his car into the lane behind his house, he isn’t expecting to run over and kill a woman. The police are able to find out little about the dead woman and only learn her name from a cheap necklace she was wearing. The most likely explanation is that she’s been living on the streets. The oddest thing, apart from what she was doing when she was killed, is that she was missing a kidney.

To add to the complications in Shepherd’s life, he gets a phone call from an old friend asking for help. Her husband has disappeared and there’s blood all over the parquet floor in their large house in an exclusive district of Bristol. Unlike a lot of fictional PIs, Jack Shepherd does have some commonsense, and insists the police are called, probably because he’s an ex-copper himself.

Naturally, even his mates in the force take a dim view of his continued involvement in the case, but Shepherd has promised May Marsh he’ll get to the bottom of her husband Bill’s disappearance. It becomes clear quite quickly that Shepherd’s loyalty to his friends is going to put him on collision course with the notorious Settle family, south Bristol’s equivalent of the Krays. Freddie Settle now spearheads her father’s and she’s every bit as ruthless as the old man now confined to a wheelchair. Shepherd has gone up against Settle senior before, but his daughter is more of an unknown quantity.

I’m always drawn to books set in my home city, and I was sorry when I had to bail on local author Jeff Dowson’s introduction of Jack Shepherd in Closing the Distance, when it became clear that an important plot strand was likely to involve cruelty to dogs. That’s the one thing in crime fiction that I simply can’t take, whether it’s an integral part of the plot as it was in that book or whether – as happens all too often – it’s simply thrown in to underscore how bad the baddies are. The latter is certainly not something I’m accusing Dowson of, but its presence in the plot meant that I put down a very promising story with an interesting main character, so when Changing the Odds came along, I was easily enticed back.

Despite the handicap of his name – why oh why are most coppers and PIs called Jack? – Shepherd quickly establishes himself as a character worth reading about. Still grieving for his dead wife, Shepherd has an on-off relationship with an accountant called Linda, but fortunately his love life doesn’t dominate the plot. He’s a rule-breaker and risk-taker, who manages to maintain a reasonable working relationship with his former police colleagues, which means that disbelief doesn’t have to be stretched too far to maintain his involvement in the case.

Changing the Odds has an excellent sense of place, which I found very appealing. Spotting the places mentioned is always good fun, even if a dense forest did seem to have sprung up on a wind-swept hillside in the Mendip hills that’s actually quite devoid of significant tree cover, but everyone is entitled to some artistic licence. Shepherd reminded me of another of the city’s fictional detective, the down-at-heel PI, Eddie Shoestring, who I enjoyed watching on TV in 1979/80, when I first arrived at university in the town that would soon become home. And that’s definitely a compliment!

Whether or not you know Bristol, Changing the Odds is a pacey, absorbing thriller that leads a merry dance around city’s darker edges and ends in a dramatic climax out on the Mendips. Jack Shepherd is an excellent addition to the ranks of fictional PIs.