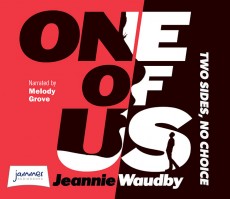 Sixteen-year-old K Child is caught up in a devastating bomb attack that radically changes the course of her life.

Sixteen-year-old K Child – just K, nothing more – is caught up in a devastating bomb attack at a tube station. She wakes up after the blast underneath the wrecked train, surrounded by the dead and the dying. A man drags her out and helps her out of the carnage.

When K meets him again, seemingly by chance, and learns that he’s an undercover police office, she’s drawn to him and, with no family and no friends, it’s not hard for Oskar to persuade her to take part in an operation to infiltrate an exclusive boarding school called the Institute, that’s believed to be a recruiting ground for the terrorist organisation that nearly took K’s life.

For 500 years, Britain has been a divided nation, with Citizens on one side and the Brotherhood on the other, but the Citizens won the civil war and so the Brotherhood have been the oppressed minority ever since.

K Child becomes Verity Nekton as part of her infiltration of the Institute. Once there, she makes friends with girls with names such as Serafina and Cesestina, and soon discovers that being undercover is neither easy nor glamorous. Her infiltration soon starts to test her loyalty to Oskar and make her question the segregation that she’s always simply taken for granted. Terrorism has taken on a human face and K is deeply conflicted.

Jeannie Waudby does an immaculate job of turning prejudices on their head, and then turning them inside out as well, for good measure. The Brotherhood comes over like a militant wing of the Amish. Both men and women wear distinctive red and white checked clothing. They are segregated in society, but change is coming. After centuries of hostility, a reconciliation agreement is close to being signed that will finally allow the country to become united again.

One of Us is tautly written, well characterised and manages to pull some truly surprising rabbits out of the hat. Even a brown and white spaniel called Raymond manages to play an important part in the plot that I just couldn’t fathom out as it was unfolding in front of me. And I know plot spoilers are to be avoided, but don’t worry, on this occasion, the dog doesn’t die.

Melody Grove’s effortless narration expertly compliments Waudby’s excellent storytelling abilities. She comes over as entirely age-appropriate for 16-year-old K, but doesn’t break stride with boys like Greg or Jeremiah, or adults such as school principal, Brer Magnus, or the enigmatic Oskar. She never veers into sounding either nasal or constipated. Waudby and Grove pull off a winning stroke here. One of Us is a YA thriller that sets up an utterly believable alternate history that will make you question your own beliefs and prejudices and look at the world around you through different eyes.