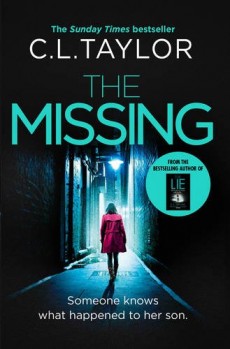 15-year-old Billy Wilkinson went missing six months ago. His mother, Claire, is convinced he’s still alive, but her case isn’t helped when a press conference goes wrong and the spotlight is turned on her own family.

Fifteen-year-old Billy Wilkinson went missing in the middle of the night and for the past six months, his mother Claire has blamed herself for not knowing what went wrong. Billy left of his own accord, that much is known, but what is not known is why he hasn’t responded to any of the appeals for him to come home or at the very least let his family know he’s still alive.

Claire still firmly believes her son is alive as does her mother, who has thrown herself into the campaign to find Billy, but it’s becoming increasing clear that other members of the family don’t necessarily share their view. A public appeal for information about Billy’s whereabouts goes disastrously wrong when Billy’s older brother Jake turns up drunk, and the press have a field day putting a family in disarray under the spotlight and asking uncomfortable questions about what might have happened.

As is usually in domestic noir, nothing – and no one – can ever really be taken at face value, and there’s an almost inevitable degree of unreliability in all narrators and principal characters. In The Missing, CL Taylor gradually peels back the layers to expose a rat’s nest tangle of emotions, half-truths and outright lies.

I was drawn to the book because of its setting in Bristol, my home city, but I stayed out of a desire to find out what had happened to Billy Wilkinson, despite the fact that I found his mother a difficult character to empathise with, possibly partly because I kept expecting her to be proved unreliable in some way. I was also not terribly enamoured by the extracts from what appears to be an instant message conversation that punctuated several of the chapters. Their purpose was reasonably clear and, with hindsight, they did add to the narrative, but at the time I found them something of an interruption.

Whatever you think of Claire as a main character, she has a compelling story to tell, and does that to good effect through the medium of a first person, present tense narrative that reaches a strong conclusion. The change of narrator in places towards the end of the book does create some issues, and sustaining two different narrative voices is a trick that Taylor doesn’t quite pull off, but it’s easy to get backed into a corner with only one character telling the story, which is something that the author seems to have realised somewhat late in the day, hence the sudden change.

That aside, The Missing does a good job of taking perceptions by the scruff of the neck, shaking them and turning them on their head.