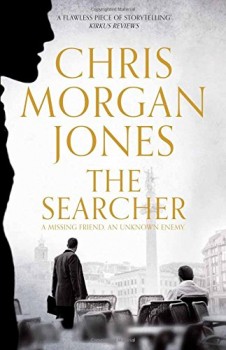 Isaac Hammer runs an investigative agency with his partner, Ben Webster. Or, at least he did until, following a raging argument, Webster disappears. Hammer’s office is then invaded by the police with a search warrant.

Isaac Hammer runs an investigative agency with his partner, Ben Webster. Or, at least he did until, following a raging argument, Webster disappears. Fifteen policemen under the command of Detective Inspector Sander descend on Isaac ‘Ike’ Hammer’s London office and demand to see details of one of the company’s cases.

It turns out that this was one that had been handled exclusively by Webster. Sander impounds his computer and places Hammer under arrest, but releases him without charge after questioning, on condition that he report to the police in a week’s time.

He goes to Webster’s house, only to find that he is not there, having left to Tbilisi in Georgia to attend the funeral of a journalist friend. His wife, Elsa, is very worried about him and, against his better judgment, Hammer decides to go to Tbilisi to find him – something he hopes he can accomplish within the week that Sander has allowed him before further questioning.

He soon discovers that this will be no easy task because it is impossible to work out who - if anybody – is in control in Tbilisi. It is difficult to tell the difference between the police and politicians, both of which groups seem to be corrupt. He can make little progress in his search because there is nobody to turn to for help.

There has been a terrorist bombing in which people were killed and as a result the city is full of protesting demonstrators. Elene Vekua, the woman from the Foreign Ministry, is clearly involved in intelligence work and may have her own reasons for being so charming towards him. Jeladze behaves more like a gangster than a newspaper editor and makes no secret of the fact that he has his own agenda. Even the driver he hires has fits of anger and is often unwilling to cooperate.

Things change when, after a very eventful couple of days, he leaves Tbilisi and heads for the mountains in search of Webster. There is a noticeable difference in attitudes and behaviour when the city is left behind and Hammer finally comes across people he thinks he can trust. He picks up clues that lead him closer to Webster, though whether he is still alive is a question still to be answered. He is introduced to Vano, the head man in a mountain village, and his son, Irodi, who is a ranger in the national park and who agrees to help him in his search. However, although he may now have allies, he finds that there are other people whom he cannot trust and who are determined to see that he doesn’t find Webster.

The plot speeds up at this point as Hammer realises that he is on the right track to find his partner and, assisted by Irodi, who knows the area very well, he begins to close in on the missing Webster. Hammer also has another concern. He has become attracted to Natela, the wife of the dead journalist, whom he had seen on a number of occasions in Tbilisi when attempting to find clues to Webster’s whereabouts. Initially she had been less than forthcoming but gradually she had begun to help him.

Unfortunately, this has become known and her life is in danger in the city. Hammer has made arrangements for her to join him in the mountains, where he feels it his duty to protect her. The ending to the novel is a real thriller, with the reader eager to learn whether Hammer will be able to locate Webster and at the same time safeguard Natela.

The last few lines seem to imply that there will be a follow up novel. If there is it will be welcomed by those who who wish to know more about this rather unlikely, always interesting, middle-aged investigator.