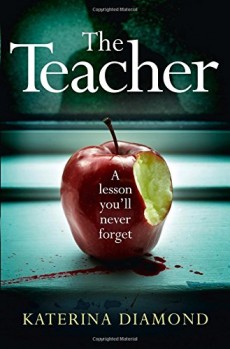 A head teacher is found hanging in the assembly hall of a prestigious Devon school just hours after he received a package that only he could interpret, and he isn’t the only one whose past is catching up with him. He took what might be seen as the easy way out. Others aren’t so lucky, and the body count soon starts to mount with a series of grisly and seemingly inexplicable murders.

DS Adrian Miles is back on the job after a suspension for an evidential muck-up that let a criminal walk free. DS Imogen Grey, new to that patch, draws the short straw and is teamed up with him. So far, so predictable. We have a couple of maverick cops who aren’t in anyone’s good books, warned off from one of the possible suspects, and left to kick their heels on the fringes of a murder investigation.

Miles, equally predictably, has split up from his wife and is doing his best to maintain a relationship with his teenage son. He’s desperate to make up for the mistake that cost him the case he’d become obsessed with. It takes a while longer to discover why Grey is something of a pariah, as the mismatched duo fall into an uneasy working relationship that seems to be based on mutual distrust and an ability to continually snipe at each other.

Entwined with this is the story of museum assistant Abby Lucas, who’s never happier than when she’s up to her elbows in dead animals. But fortunately, the animals are long dead museum exhibits that Abby is restoring for the re-opening of a gallery in the local museum. Abby is a solitary soul, whose life fell apart when she was raped by two fellow students at a party in her first year of university, and now much prefers taxidermy to partying.

She’s joined in the museum by Parker West, who has a master’s in zoological archaeology and is working towards his PhD. He’s there to get some hands-on experience in the collection. The pair are socially awkward, but bond over their fascination for long-dead animals and birds.

For much of the time, The Teacher is a fairly bog standard serial killer romp, with a series of relatively one-dimensional characters all falling victim to their past misdeeds. As it’s fairly obvious from the beginning what they’ve all been up to, it’s hard to give a monkey’s damn about any of them, which somewhat detracts from the impact of the increasingly gruesome ways they all meet their deaths.

With the exception of Abby’s story, there’s precious little subtlety anywhere in Katerina Diamond’s debut, and at times it came perilously close to slipping into little more than a one-dimensional gore-fest. The descent into horror was simply too over the top for me and, as the book progressed, I found my disbelief being suspended from a thread that was getting thinner by the minute. This wasn’t helped by certain scenes in which the author seemed not to be able to tell apart the work done by coroners and pathologists, which bounced me right out of the narrative at a few crucial moments.

The Teacher would have benefitted from less gore and a more nuanced delivery, rather than the rather uniform black and white, shot through with buckets of red, which characterised what I presume is the first outing for detective duo Miles and Grey. The main characters do have a lot to offer, though, and if Diamond can dial back the gore and concentrate more on making her audience care about the characters, this could turn into a series worth following.