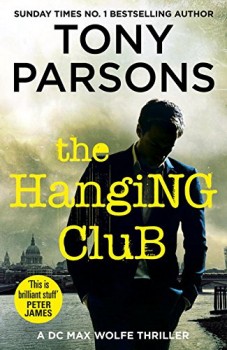 It’s the old story as to whether everyone deserves justice, as this pack of vigilantes, who are hiding behind the Twitter handle of Britain’s most famous executioner (Albert Pierrepoint), go for victims from the scumbag end of things. So you can virtually hear the choruses of “serve ‘em right” from the gutter press and from social media. And yes, tabloid hack Scarlet Bush (nurse, my sides) is here again.

I’ve always been a tad cynical about the hype surrounding former music journalist Parsons and his arrival in the genre, so it’s been a slow-burner of a series for me. Earlier on, I thought he was trying too hard to subvert genre tropes without actually doing very much new. And the characterisation has always been a tad patchy.

That doesn’t change much here. Max has a history of maverick behaviour, but seems to have settled down - even if he and DC Edie Wren appear to be the only cops on the case (his boss, DCI Pat Whitestone, has personal problems of her own). This has the net effect of Max being turned into superman - there’s one particular key scene which had me thinking his recovery rate was akin to that of a movie character.

Max’s private life is a key part of these books. The eye for an unsuitable woman is always rather tiresome, but Parsons introduces an old ex-services friend down on his luck alongside Max’s daughter Scout and randy dog Stan.

The book is atmospheric, the plot holds together fine and the wide sweep of London makes the city a character in its own right. It’s a perfectly acceptable read, and one that would make a brooding TV drama, but beyond that, there’s not a great deal that’s new.