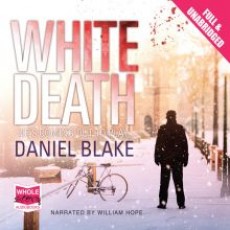 FBI agent Franco Patrese is on the trail of a serial killer who has a fixation with tarot cards and Ivy League colleges.

Boris Starling was the man behind the magnificently sprawling Messiah, set in Russia. Wearing another hat, he's also Daniel Blake, whose hero, Franco Patrese, is an FBI agent. Some throwaway references during the book suggest White Death is part of a series. It does, though, stand alone perfectly adequately.

Blake has come up with several neat strands to what could have been a fairly average thriller. At the front of the queue is its chess theme, married with tarot cards and Ivy League colleges.

Kwasi King is the Muhammed Ali of the chess world. A fortnight before he's due to defend his world title, his devoted and single-minded mother is found murdered on the Yale campus, a tarot card next to her dismembered body. He is unable to cast any light on why she was there. Then more bodies turn up at other colleges, all accompanied by a tarot card. Soon Patrese receives his own card - The Fool.

About halfway through the book, Blake jams on the brakes and reveals whodunit. It then becomes an old-fashioned cat and mouse whydunit game, albeit with a rather unusual angle and with decidedly unusual methods.

White Death is a touch slow and talky, but boasts an intriguing and quirky enough plot for me to want to continue listening. Blake is prone to information dumps - starting off with how to shrink heads (clearly what every household needs to know!) and then ambles down a byway halfway through with a fairly lengthy discourse on chess and artificial intelligence.

Canadian actor William Hope copes admirably with the book's changes of pace. I can't tell you if the accent is right, but his laconic delivery works fine. American readers may spot some Brit slips, though - Americans don't measure distances in metres, for a start.

One of the plot twists as Patrese closes on his prey won't come as too much of a surprise - and I'm never guaranteed to spot them. This one got me some funny looks in a car park when I yelled: "I knew it!"

As for the ending, I still can''t decide if it's a cop-out or master stroke. Whichever, it made me shout out loud again! So hey, Blake has done his job and yanked a reaction out of me to a book that's clever, engrossing, but could have done with a hefty edit.