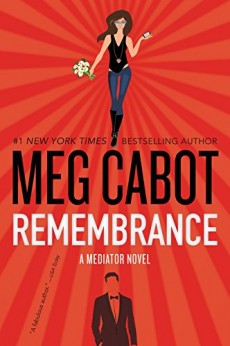 When property tycoon Paul Slater threatens to tear down Suze Simon’s old family home and unleash an ancient curse, Suze is faced with a dilemma. Give in to blackmail, or save her boyfriend’s soul by herself.

Suze Simon is back! Fifteen years after the release of the first book in the Mediator series, our kick-ass, ghost-busting heroine returns, all grown up, but still with great hair, stylish clothes and a fine line in inventive cussing. She is also engaged to the hottest former ghost in California, the newly-qualified Doctor Jesse de Silva. The only cloud in a very sunny, blue sky is her fiancé’s stubborn insistence on no sex before marriage, and as the marriage is a year off, Suze is getting rather impatient.

Jesse is working hard at the local hospital, while Suze is doing an unpaid internship at her old school, the Junipero Serra Mission Academy, working for her friend and mentor Father Dominic. Much to Suze’s irritation, someone else comes back to haunt her and this time, it’s not a ghost.

Suze didn’t exactly part on good terms with Paul Slater, a fellow mediator and time-shifter. He made a pass at her at their graduation, and her knee made contact with a delicate part of his anatomy. But Paul is now stinking rich and out to cause trouble. He’s bought up Suze’s rambling old Victorian home in the Carmel Hills, the one where she first met Jesse, and he’s threatening to demolish it, which will potentially trigger an old Egyptian death curse and turn Jesse into a vengeful spirit.

Sounds far-fetched? Well, maybe, but Suze doesn’t want to take any chances and, as she’s been dealing with ghosts since she was a toddler, who can blame her?

I’ve been addicted to this series ever since the first book appeared in the UK and have recently been enjoying them all again thanks to Whole Story Audiobooks, so when I heard there was to be another instalment in the story of Suze and Jesse, this time for an adult audience, to say I was all over it like a rash is no exaggeration. I’ve waited 12 years since the publication of the last book in the series, Heaven Sent, and it’s fair to say that even after all that time, Remembrance didn’t disappoint.

Suze is as strong-willed and resourceful as ever, and still jumps into everything feet first, determined to do things her own way, even if it does lead to her nearly being strangled and drowned by the very disturbed ghost of a murdered child. The young girl has latched on to one of her school friends and sees herself as their protector, even though her unseen presence is sapping her friend’s energy. Suze soon finds herself up to her bruised neck in a decade-old murder, as well as having to fend off Paul Slater’s attempt at blackmailing her into having sex with him.

Cabot has done a good job of aging her characters. One of Suze’s stepbrothers, Brad Ackerman, is now married to Debbie Mancuso and they have triplets. Jake is farming marijuana for medicinal use and David is away at college. It was great to meet old friends like the Ackerman family and Suzie’s school friend, Cee-Cee, now working as a reporter and running the alumni magazine. Even vacuous Kelly Prescott, now married to a billionaire, plays a part.

Remembrance certainly deals in darker themes than the ones touched on in the earlier books and Cabot doesn’t shy away from difficult issues. Meg Cabot is, for me, the Queen of Paranormal Romance, and I very much hope that we haven’t seen the last of Suze Simon and Jesse de Silva.