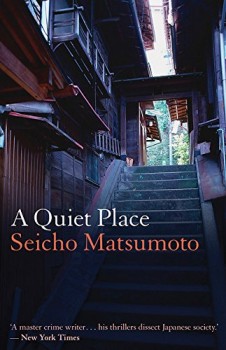 When Tsuneo Asai’s wife dies unexpectedly, it is some time before he discovers that an apparent accident is more than it seems, and takes steps against the person he deems responsible.

Tsuneo Asai, a mid-level Tokyo civil servant, is away on a trip when he gets news that his wife has died after a heart attack. She was apparently taken ill on the street and died in a small cosmetics shop where she had sought help. Asai is slow to doubt this version of events, but as the death occurred in an unexpected area of town, comes to believe that his wife must have been having an affair somewhere nearby.

His initial investigations take him nowhere, but a few months later he is surprised to find that the shop in which his wife died, and an adjoining house, have been transformed into a small hotel. His suspicions focus on Konosuke Kubo, the owner of the house, and facts revealed by a private detective hired by Asai suggest that Kubo was indeed his wife’s lover.

Rather than go to the police, he decides to tackle Kubo himself, with results which form the subject of the second half of the book. There is a violent confrontation, in which Asai abandons his hitherto steady and measured progress, makes a few mistakes, and needs to play a cool game to evade justice.

This is a story full of suspense and restrained emotion, somewhat reminiscent of Patricia Highsmith. The author dissects the action and thinking of the protagonist in detail; he comes across as an obsessive individual with no close friends, persistent in seeking the truth behind his wife’s death but not thinking clearly about what it is he is seeking to achieve with the knowledge when he has it.

His resourcefulness comes across as quite admirable as he begins his attempt to get to the facts, and his willingness to invest in a private detective might suggest a deep love for his wife. However, as we get to know him better it becomes clear that his wife was deceiving him while denying him marital rights, and that his quest is more about revenge on the lover, to whom he attributes most of the blame. Once the man is identified, Asai’s actions become almost animal; he loses control and from being the wronged party becomes a criminal. The tension steadily increases for the last part of the book to an agonising level.

The setting comes through very strongly in Asai’s interactions with his colleagues and those with whom he comes into contact as a result of his wife’s infidelity. Asai exhibits a formality of behaviour which contrasts strongly with the volcano within. This is a crime understandable in Western terms, but distinctly Japanese in the way events unfold.